Soak in the centuries of history in Valletta, an elegant UNESCO-recognised port town constructed by the Knights of St John as a ‘city built by gentlemen for gentlemen’. You’ll see thick battlements, 16th-century mansions, and sturdy fortresses sitting next to contemporary architecture from Renzo Piano. Don’t miss a look at the Opera House, Parliament Building and new City Gate which have brought this ancient city very much into the future. It’s the perfect home base for exploring Malta, a fascinating island rich with natural beauty and over 7,000 years of history – don’t miss the Hypogeum. 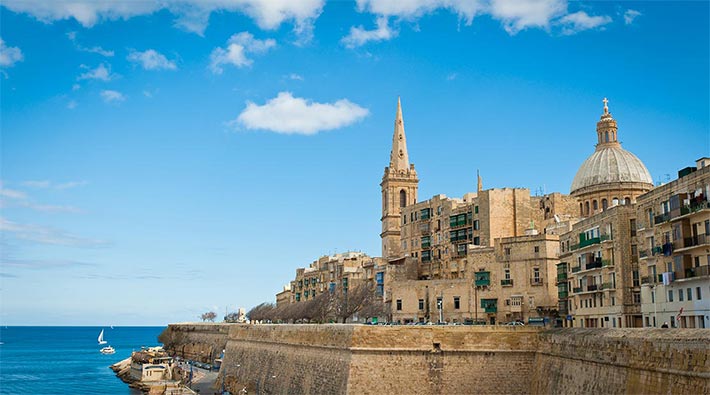 What You Need To Know About Valletta

What are the can’t-miss sights in Valletta?

Get immersed in history with the interactive Great Siege of Malta experience. You’ll wander around the old town with an audio tour, allowing you to go at your own pace as you learn more about the Knights of St John. Don’t miss a visit to St John’s Co-Cathedral, lavishly decorated in the Baroque style and housing one of Caravaggio’s most famous paintings, ‘The Beheading of St John the Baptist’. The Palace of the Grand Masters is another important attraction, filled with ancient armour and medieval tapestries. And for a look at contemporary Valletta, stroll along the main shopping area of Republic Street.

How can you reach Valletta from the cruise terminal?

Cruises to Malta take you right up to the Valletta Waterfront pier, which is a worthy attraction in itself. The waterfront’s historic warehouses house upscale restaurants, bars and shops with a sea view. It often hosts live music concerts as well! Essentially, you’ll already be in the city, but you can get around Valletta in a number of ways. It’s possible to walk up the hill into the old town if you’re quite fit, but be warned that it’s a steep climb. Taxis and horse-drawn carriages are options, but the easiest and cheapest way to get into town is with the Upper Barrakka lift.

When is the best time to visit?

The best time to visit Valletta will depend on your tolerance of both heat and fellow visitors! The summer months are quite popular for guaranteed sunshine, making it a fine time to relax on Malta’s golden sandy beaches and stylish outdoor pools. There’s usually a sea breeze to keep the air fresh as well! However, one thing to keep in mind is that many smaller businesses shut down for a few weeks in August to go on their own holidays. Winter brings cooler, mild temperatures but the added bonus of having many attractions all to yourself, and Valletta is lovely lit up for the holidays.

VALLETTA - DID YOU KNOW?

The Upper Barrakka Gardens are conveniently located near the cruise ship port and waterfront area. They’re well worth a visit for those in search of a bit of shade, carefully tended to provide a lush environment to relax and enjoy vistas over the harbour.

Valletta offers a convenient base for exploring the rest of Malta. Take an excursion to neighbouring areas like Mdina, called ‘the silent city’ for its hushed atmosphere and wealth of architectural highlights. See its ancient walls and moats, St Paul’s Cathedral, and stately homes constructed for the Maltese aristocrats centuries ago.

Malta’s neighbouring island Gozo is home to what many believe is the world’s oldest manmade structure. The Ggantija Temples were constructed around 3600 BC, which puts it a good thousand years ahead of Stonehenge and older than Egypt’s pyramids. Legend holds that these temples were built by giants!

The Blue Grotto is one of Malta’s most iconic sights, located on the southwest coast of the island. You can only access this striking series of caves by taking a boat tour, which lasts approximately half an hour as its way around these natural attractions. The grotto gets its name from the nearly fluorescent colours of the water here.