Journey back in time to the medieval era when you visit UNESCO-recognised Visby, one of Sweden’s best-preserved examples of architecture from this time period! This adorably scenic town is located on the Baltic Sea island of Gotland, notable for its city walls which date back to the 13th century. Cobbled streets, historic stone houses and vibrant wooden cottages dot the old village, which you can learn more about in the local Gotland Museum. Unwind and enjoy the sea air, or take part in the festivities of regular events like Medieval Week and the upcoming international crime festival. 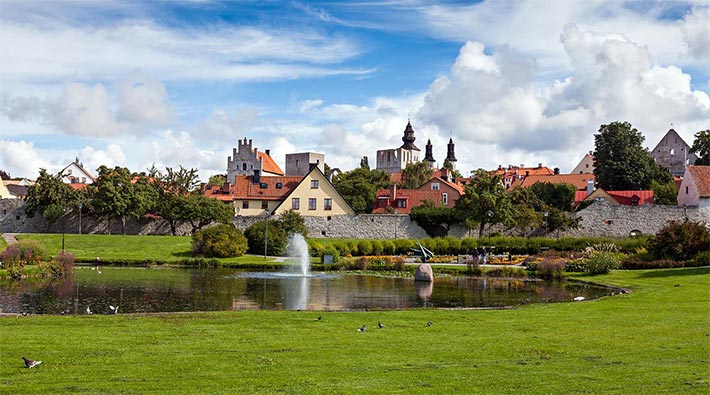 VISBY - DID YOU KNOW?

Gotland is known as Sweden’s ‘holiday island’, attracting visitors drawn to its rugged clifftop scenery, flocks of grey sheep, wild orchids and sandy beaches. (Sjalso and Faro are favourites with swimmers). It’s been inhabited for over 7,000 years, invaded over the years by Germans in the 13th century and Danes thereafter before being regained by the Swedes in the 17th century.

The city of Visby is a UNESCO World Heritage Site, boasting historic homes, a museum, and local craft shops where you can pick up a souvenir or two. One of its most notable properties is the Burmeister House, built for merchant Hans Burmeister in 1652 and standing as a fine example of the Baroque style.

Visby’s bustling market square is a natural meeting place in the city, offering a selection of eateries, flower boxes and the ruins of St Catherine’s Church. It’s an ideal spot for a pitstop when your feet need a rest!

The city is known for its fragrant roses, which you can see not only in the medieval ruins but also in the Botanical Gardens. Don’t miss a visit to the limestone city walls, which feature dozens of medieval towers including the Powder and Maiden’s Towers.