Positioned near the Great Barrier Reef, Townsville is blessed with over 320 days of sunshine a year and laid-back vibes. Learn more about the region’s diverse wildlife by visiting nearby sites like the Billabong Sanctuary with its wombats and koalas or Reef HQ Aquarium with its marine life. The city of Townsville may be surrounded by head-turning natural attractions, but there’s plenty of manmade appeal as well with outdoor eateries, stately 19th-century architecture and hip designer boutiques. It’s considered the gateway to the Wet Tropics, so expect warm temperatures and lush greenery! 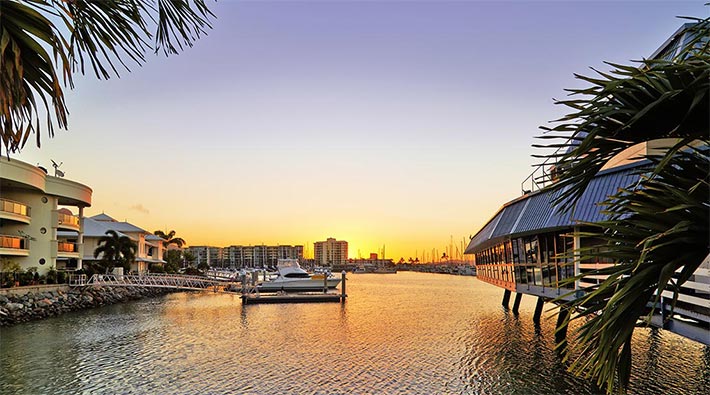 TOWNSVILLE - DID YOU KNOW?

You can learn more about the Aboriginal tribes who have long called the Townsville region home, the Bindal and Wulgurakaba people. The Townsville Aboriginal and Torres Strait Islander Cultural Centre is conveniently located next door to the Reef HQ. Have a wander over to the Museum of Tropical Queensland, or explore the Strand waterfront promenade to soak in the sea air.

Scuba diving and snorkelling is world-class in Townsville, allowing you to dive under the waves to see spectacular shipwrecks like the SS Yongala. You can also venture out to the nearby islands, many of which are part of the Wet Tropics World Heritage Area. See the wildlife at Magnetic Island, or walk the Thorsborne Trail on Hinchinbrook Island.

Another way to get out and explore the port’s natural surroundings is on an excursion to the north’s Paluma Range National Park. About an hour outside of town, it’s well worth the effort as you’ll see a staggering range of vibrant bird life, unusual butterflies and the gorgeous Jourama Falls.