Visiting Regensburg may make you feel as if you’ve journeyed in a time machine – this UNESCO World Heritage site is over 2,000 years old, making it the oldest city you’ll find along the Danube River. Its Old Town is extraordinarily well-preserved, giving you the chance to get up close and personal with medieval architecture, quaint cobbled streets and an imposing Gothic cathedral. Yet Regensburg feels anything like a stuffy museum! This laid-back university town offers a youthful buzz and charming atmosphere dotted with open-air cafes, beerhalls and green parks overlooking the river. 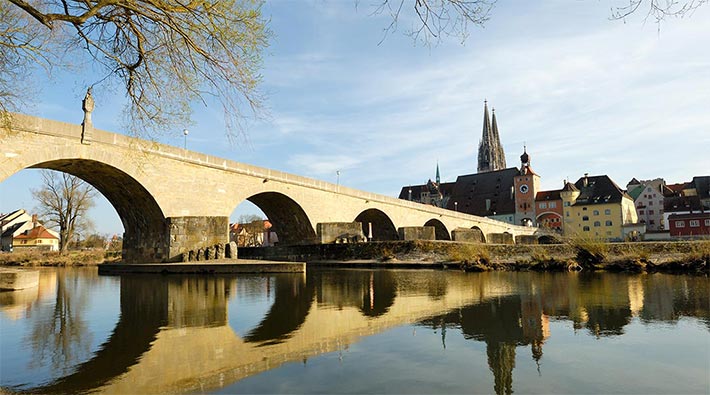 REGENSBURG - DID YOU KNOW?

There was a planned demolition of Regensburg’s historic buildings during the 1960s – fortunately, this didn’t happen and there are now 1500 structures formally included under the UNESCO banner for their medieval heritage.

You can go further back in time when you see the Arched Gate or ‘Porta Praetoria’, built by the Romans in 179 AD. The remnants of this stone military gate stand alone as the best preserved in Northern Europe, crafted under the supervision of Emperor Marcus Aurelius. Another top historic site is the Old Stone Bridge, linking Regensburg’s Old Town and the newer Stadtamhof since the Middle Ages.

There are plenty of places to relax in Regensburg after you’ve explored its historic nooks and crannies! Curl up with a coffee and cake in one of the city’s charming cafes. The Kunstlerhaus Andreas-Satel is a popular hangout. This former salt storage house is now a café, art shop and cinema.

Get a sweeping view of the city by making the trek up the tower of the Holy Trinity Church, featuring originally fixtures crafted hundreds of years ago. You can pay a small fee to travel up to the top of the bell tower, and be rewarded with a birds-eye view of the city and Danube valley below.