Palermo is the capital city of Sicily, famed for its Arab-Norman architecture, bustling atmosphere and delicious culinary traditions. Spend your time in this Italian city exploring its cultural hotspots, from the Palazzo dei Normanni to the opulent Teatro Massimo. Venture a bit further afield and you’ll find perfectly preserved ruins from Ancient Greece or mummified remains in the catacombs underneath Monreale Cathedral. You don’t have to travel far to find relaxing beaches, and the city’s shopping scene is excellent whether you prefer open-air markets or air-conditioned designer boutiques. 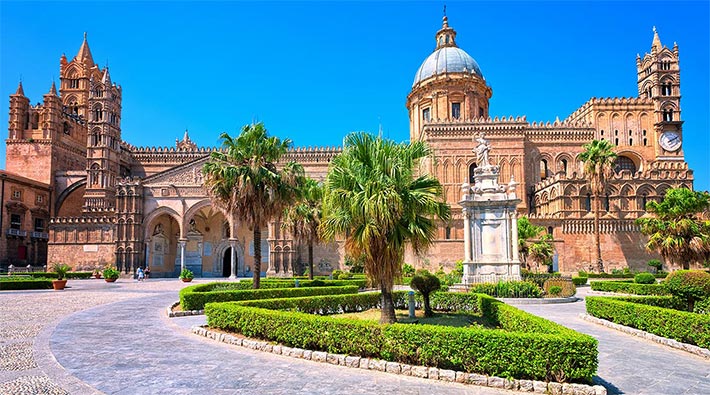 What You Need To Know About Palermo

How to reach Palermo from the cruise terminal

You’ll arrive slightly to the north of the city centre at the busy Stazione Marittima, a colourful and at-times chaotic terminal! It’s possible to walk into Palermo’s old town from here in about twenty minutes, or you can opt to use one of the plentiful taxis just outside the door. However, be aware that sometimes it’s faster to walk because of the traffic! Be sure to use white licensed taxis, and make sure the meter’s running before you set off. If you want to travel like a local, you can always give the bus system a go, or opt for organised double-decker tours.

What are the can’t-miss sights in Palermo?

History enthusiasts won’t be able to resist Palermo with its blend of influences from centuries past! The Archaeological Museum is just a 10-minute walk away from the cruise terminal, featuring plenty of Roman and Greek artefacts. You won’t be able to miss the central Palazzo dei Normanni, which houses the Silician parliament. This beautiful building is a true must-see with its medieval mosaics and gold trimmings. For neoclassical splendours, visit the Teatro Massimo with its massive indoor stage and opulent décor. Admire the Baroque style of Palermo’s churches, visit the puppet museum, or see the preserved mummies in the catacombs underneath the Monreale cathedral.

Typical food and restaurants in Palermo

Sicilian food makes ample use of fresh citrus fruits (it’s sometimes called the Land of Lemons) and fragrant spices and herbs. From pistachios to olives, you can spend your whole time in Palermo snacking on simple yet delicious delicacies. Typical dishes include the Seven Veils Cake, a rich concoction put together with layers of dark chocolate and hazelnut. Don’t miss the chance to try crunchy cannoli pastries stuffed with sweet ricotta, or for a quick and savoury treat you can opt for panelle chickpea fritters. Arancini rice balls showcase the Arab influence on Sicilian cuisine, whether stuffed with cheese or meat.

PALERMO - DID YOU KNOW?

Many cultures have left their marks on the city. Palermo was founded by the Ancient Greeks, before it was absorbed into the Roman Empire, and then in turn the city was taken over by the Arabs, the Normans, and the Holy Roman Empire!

If the artefacts in the Archaeological Museum just aren’t enough, you can get out and explore the ruins around Palermo. Sicily is dotted with former temples, perhaps most notably Segesta which dates back to the fifth century BC. This Greek temple sits in a beautiful rural location, accessible by bus or car from Palermo. There are also Greek temples at Agrigento and Selinunte, both popular excursions.

Are you looking for something special to pick up in Palermo? The city’s antique shops are filled with genuine treasures, whether it’s lace fabrics, handcrafted rugs or unique pieces of crockery. Sicilian wine is currently having a moment, while delicate marzipan candies are also top choices for bringing back with you on ship. And of course, this being Italy, you’ll find everyone from Armani to Dolce and Gabbana represented in Via Liberta.

Head to the Palazzo Abatellis if you want to see a stunning array of fine art, ranging from Middle Ages panels to Baroque sculptures. The museum is a work of art in itself, housed inside the 15th-century palace.