It’s impossible to think of Norway without imagining the impressive scenery of its famous fjords, all dramatic cliffs and crashing waterfalls. This Scandinavian destination also includes Arctic glaciers and well-tended green spaces in its array of landscapes. From multicultural cities to tiny fishing villages, there’s a laid-back sensibility where you can visit art museums and enjoy freshly caught seafood with a view. If you’re feeling sporty, don’t miss the chance to go into the wilderness on a kayaking or hiking excursion! 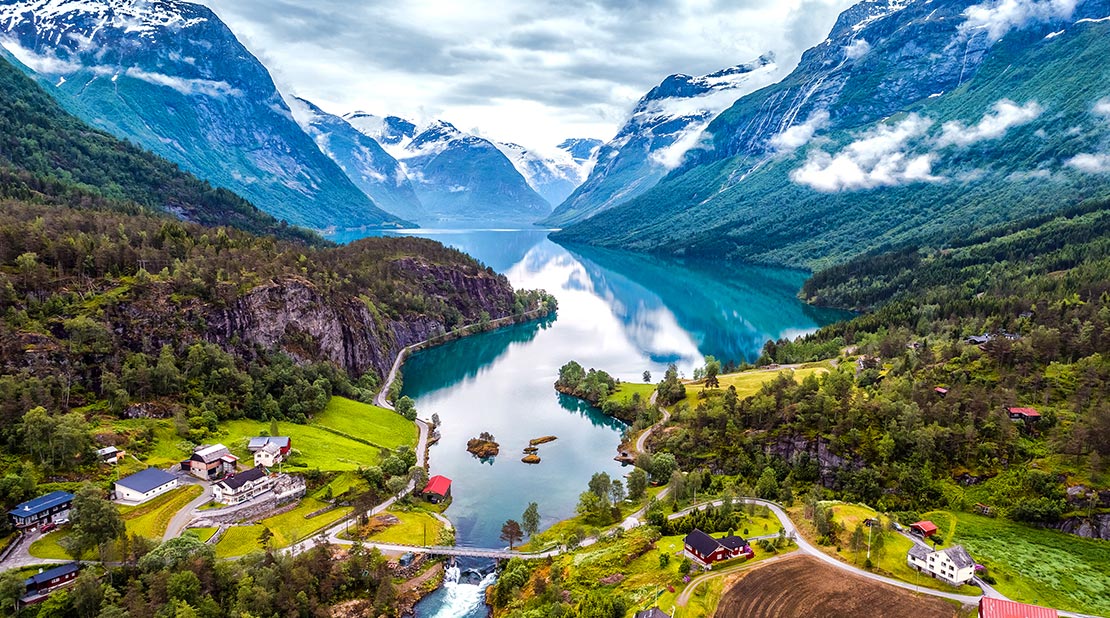 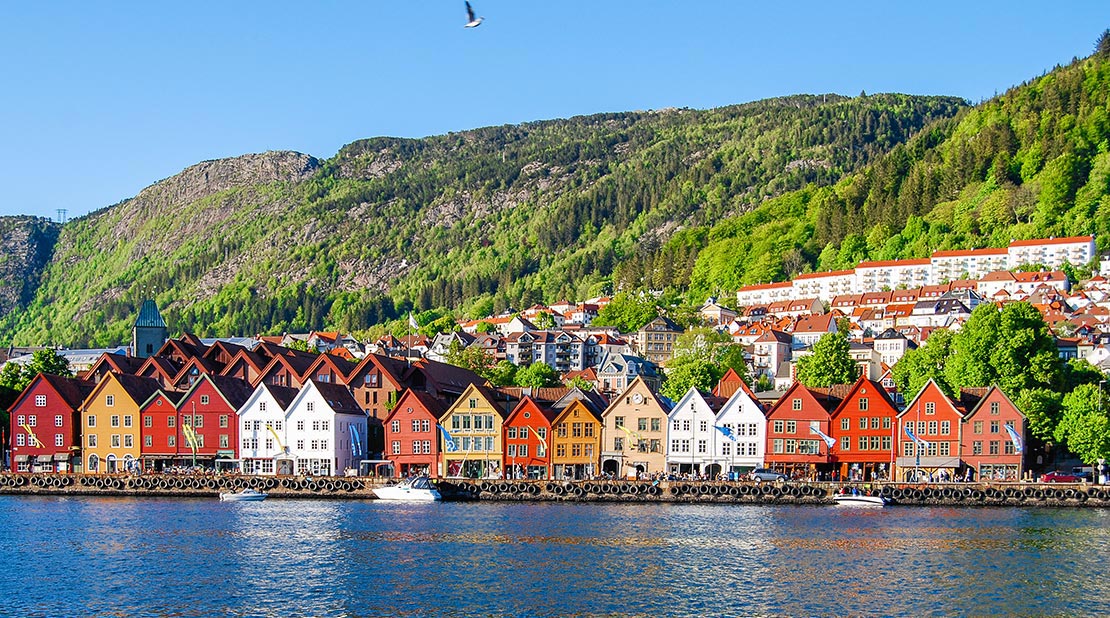 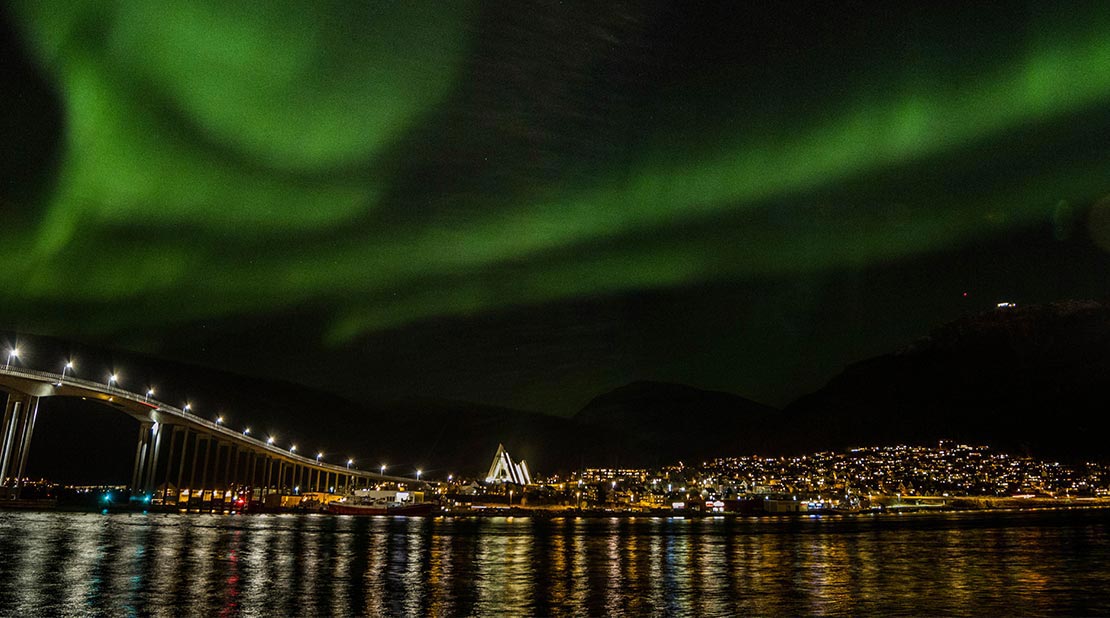 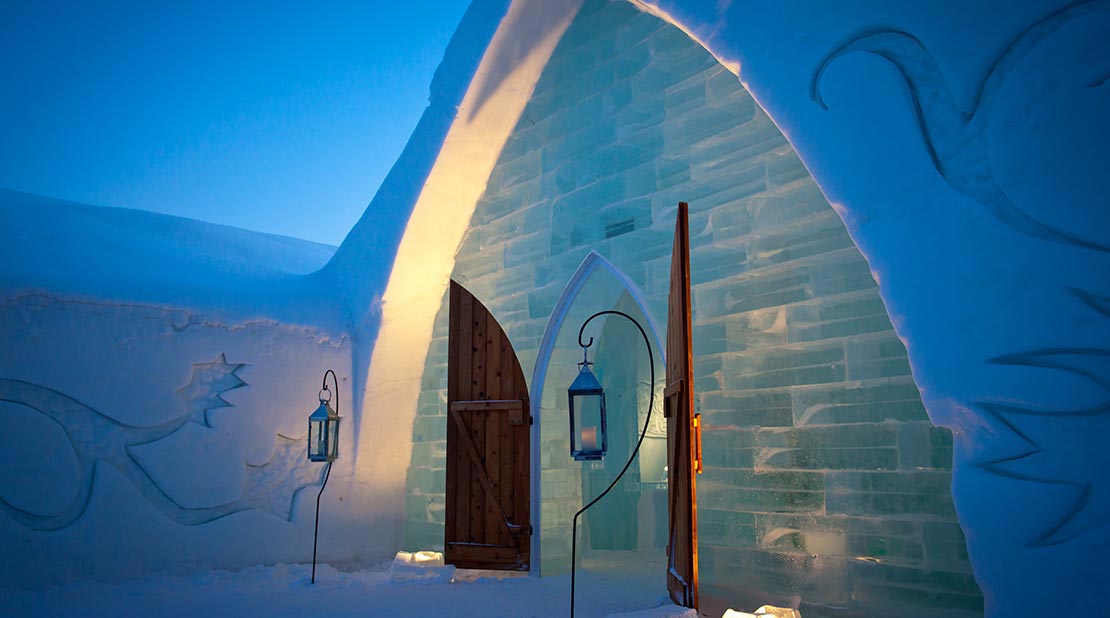 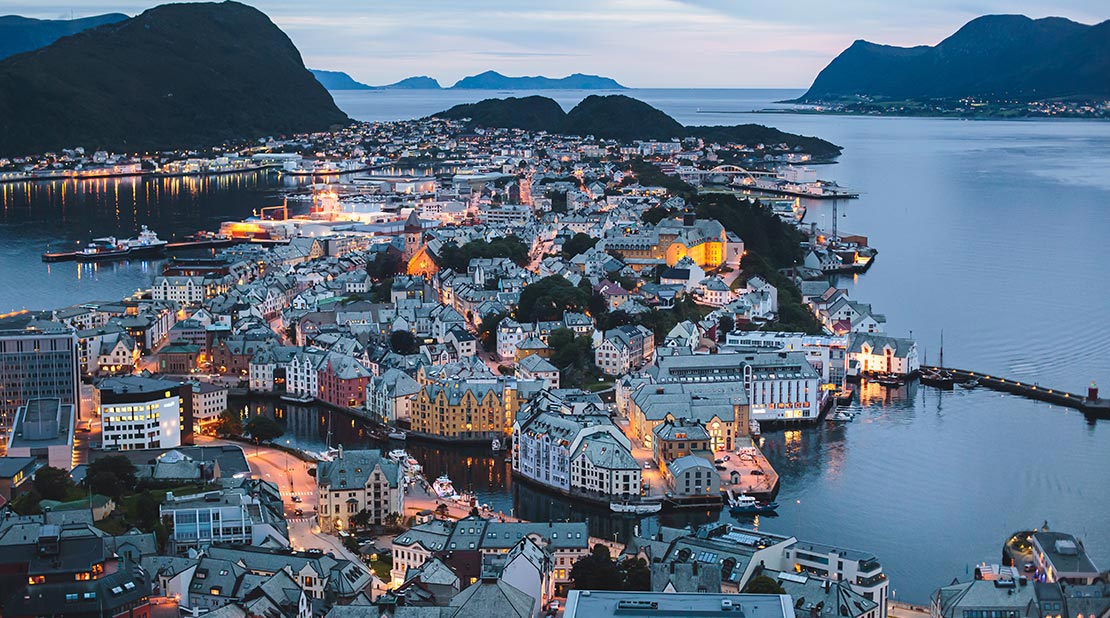 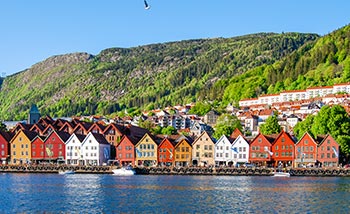 Surrounded by majestic fjords and rugged mountain landscapes, Bergen’s natural beauty is one of its star attractions. This colourful Norwegian port features neat rows of wooden houses positioned along its historic wharf, as well as a thriving Fish Market where you can sample the catch of the day. Don’t miss a trip on the funicular up the Fløyen Mountain to enjoy the sweeping views and hiking trails at the top. 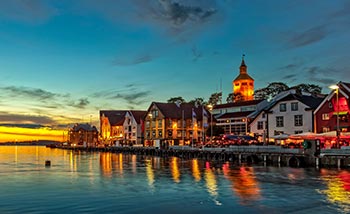 The gateway for excursions into the Lysefjord’s amazing cliffs and waterfalls scenery, Stavanger offers a traditional Nordic charm all its own. You can also learn more about the town’s heritage with a visit to the Stavanger Cathedral, Norwegian Petroleum Museum or Canning Museum. Have a wander around the harbour and Old Town to see colourful wooden homes, or pick up souvenirs on the Øvre Holmegate shopping street. 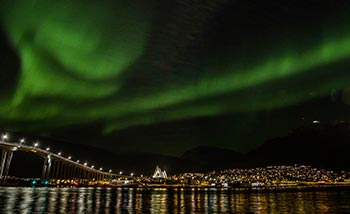 Positioned 400km above the Arctic Circle, Tromsø is surrounded by gorgeous polar landscapes and fjords. It’s a great place to see the Northern Lights, and you can admire its unique architecture including the peak-roofed Arctic Cathedral and modern Polaria aquarium. Despite its remote location, there’s a lively atmosphere in this university town, with loads of cultural events and the most pubs per capita in Norway! 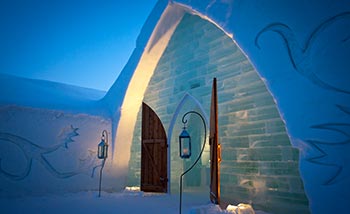 With its location near the Finnish and Russian Borders, the small town of Kirkenes is known as the gateway to the East. See the incredible Kirkenes Snow Hotel, built from scratch each year out of fresh snow! In the summer you can see puffin colonies, while winter brings dog-sledging trips, reindeer safaris and ice fishing. And if you’re lucky, you’ll get the perfect view of the spectacular Northern Lights overhead. 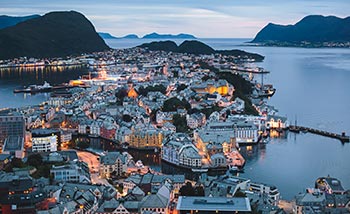 Norway’s capital city boasts a newly developed waterfront lined with bustling shops and eateries. Take a seat in one of the outdoor cafes to watch the street musicians, or visit the Norwegian Maritime Museum and Viking Ship Museum. Art fans won’t want to miss a visit to the Munch Museum, home to ‘The Scream’ and other masterworks. Oslo also boasts the Nobel Peace Centre, along with an abundance of green spaces!

What You Need To Know About Norway

When is the best time to visit Norway?

With warmer temperatures and abundant daylight, summer is one of the top times to visit Norway, and this is considered the peak season for travel here. But if you want to take in the colourful spectacle of the Northern Lights, visit during the winter months instead! The winter’s also a great time to visit Norway if you’re a fan of snow sports, because you can enjoy popular past-times like ice fishing, snowmobiling and even dog sledging during this time. Springtime can be particularly beautiful in the Norwegian fjords, with melting snow leading to trickling waterfalls and an explosion of wildflowers in the fields.

What are the highlights of a Norwegian cruise?

You’ll tour your way up the coastline of Norway during this type of cruise, usually starting with the port of Bergen. Bergen’s highlights include its famous fish market, bevy of museums, and a funicular taking you up to the peak of Mount Floyen to admire the views below. Visit the Nobel Peace Centre and Vigeland sculpture park in Oslo, or cruise along the Aurlandsfjord in Flam. Stavanger is another hotspot for outdoor recreation, most famous as being the gateway to the spectacular scenery of the Lysefjord. Old Stavanger is a treat to explore on foot, with its beautiful harbour and traditional wooden homes.

Which local foods in Norway should you try?

Surrounded by water, it’s perhaps no surprise that Norway’s seafood is top-notch! Visit local fish markets in each port to try the catch of the day, or try preserved fish dishes like ‘klippfisk’ which is dried and salted. When in Bergen, sample the local fish soup made with double cream and light seafood stock to create a silky, tasty meal. Elk, reindeer, and sheep also feature heavily on Norwegian menus, dished up with creamy mashed potatoes for a hearty meal. Start your day with sweetened ‘lefse’ flatbread smothered in cinnamon sugar, or indulge in Norwegian waffles dished up with berry jam.

NORWAY - DID YOU KNOW?

Animal lovers will be in heaven on a trip to Norway with its abundance of native wildlife! Polar bears outnumber humans once you get past the Arctic Circle on the Svalbard archipelago, which is also home to massive walruses and tiny, snow-white Arctic foxes. You won’t have to venture quite so far north to spot a reindeer or moose, and if you’re lucky you may even catch a glimpse of the elusive Eurasian lynx!

The waterways around Norway are no less filled with fantastic creatures. Take a whale watching cruise from Andenes in the North Atlantic and you may see humpback, pilot, minke and orca whales frolicking in the waters here.

Art fans will also be delighted with the entertainment on offer in Norway, starting with Oslo where you can see Edvard Munch’s masterwork, The Scream. This is found in the National Gallery, which also boasts an array of other paintings and sculptures from Norwegian artists.

Do you want to learn more about Norway’s Viking history and heritage? Take a day trip from Oslo to the Viking Ship Museum, which displays an assortment of ships dating back to the 9th-century! Perhaps the most intriguing of these is the Osberg, which was used as a tomb. 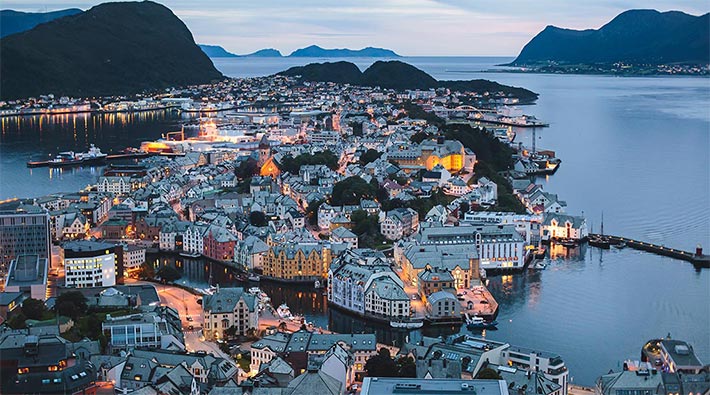 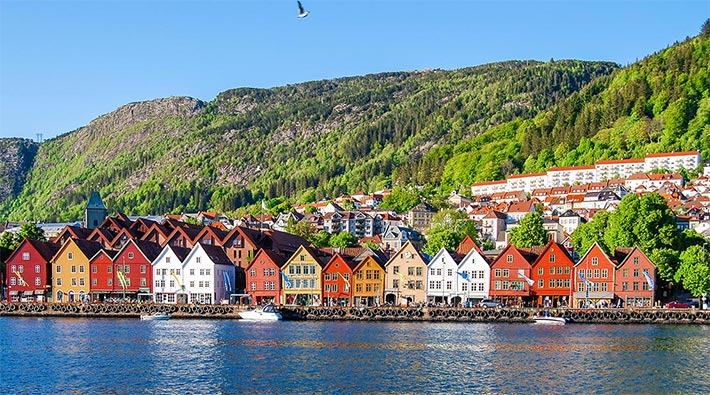 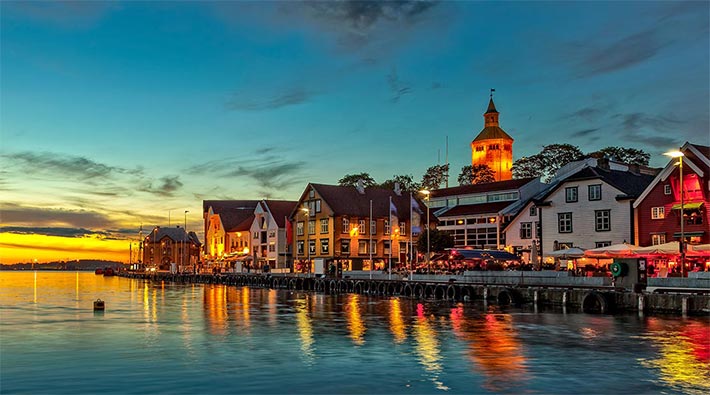 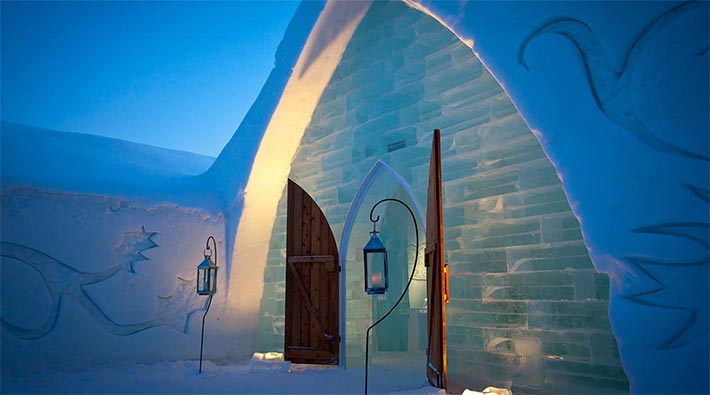