Tucked away on the island of Kyushu in Japan, Nagasaki is a city that will forever be remembered for its role in WWII world history. Today you can learn more about this history by visiting the city’s Atomic Bomb Museum and Peace Park, filled with moving tributes and spaces for solemn reflection. Beyond its past, Nagasaki is very much a modern city moving into its future. It offers a picturesque harbour, interesting shrines and temples to explore, and an easily walkable urban centre that takes you from one district to the next. The city is hilly, inviting you to admire the view from the top! 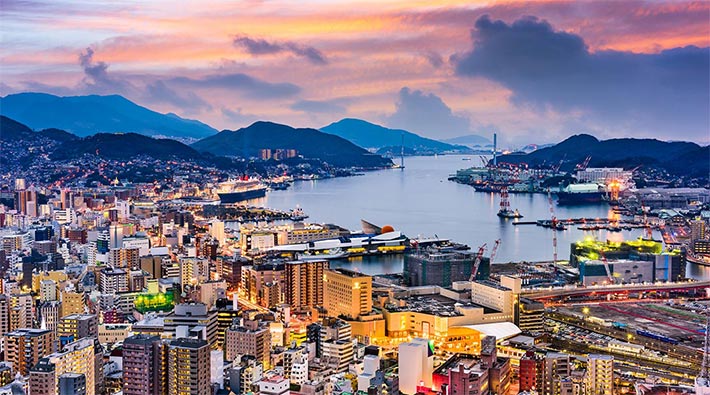 What You Need To Know About Nagasaki

What are the can’t-miss sights in Nagasaki?

If you only have the time to visit one sight in Nagasaki, it has to be the Atomic Bomb Museum. It’s deliberately placed in the hypocentre of the explosion, marking the area where thousands were injured and killed when the bomb went off. Next door is Peace Park, a place to reflect on what you’ve just seen in the museum. Glover Garden is another interesting sight, with its 19th-century wooden buildings dating back to the city’s heritage as a trading post for Western merchants. Do you want to learn more about the colonial era? Visit the Dejima Museum to see the Dutch influence here.

How can you reach Nagasaki from the cruise terminal?

Nagasaki’s port offers visitors a central location near the town centre. You can easily walk from the exit to the Glover Garden in about ten leisurely minutes, as well as the tram stop and main waterfront promenade. Most tourist attractions are accessible within a 20-minute walk. However if you prefer, you can take a taxi straight to the destination of your choice – taxis are cheap and run on meters. There’s a well-ordered tram system you can use to get to attractions – take lines 1 or 3 to get to the Nagasaki Bomb Museum.

There aren’t many amenities actually in the cruise terminal, as most visitors simply pop in and out for the day and head straight to local attractions rather than lingering. Nagasaki offers a number of modern, spacious parking facilities throughout its city centre. You’ll find parking just a few minutes away near the main train station, but this lot is often full! As an alternative, the Dejima district offers plentiful parking areas and is a short wander over from the terminal. Look for Nagasakiminato parking lot or Hashimoto Ohato parking lot for additional parking spaces near the port.

NAGASAKI - DID YOU KNOW?

Before the war, Nagasaki has long been famous for its historic harbour and its status as a Gateway to the West. Commodore Matthew Perry sailed through the impressive channel leading up to the harbour back in 1853, in his search for an area to open up trade with Japan. The city had already been trading with China and Europe for centuries by this point, giving it a longstanding cosmopolitan appeal!

The atomic bomb missed its intended target of the city centre, hitting the suburbs instead. This means that a good portion of Old Nagasaki is still intact. You can see its historic temples like Sofuki-ji, built in 1629, and see its antique bells and cauldrons. Hosshin-ji is even older, with a temple bell dating back to 1438.

Its blend of cultures makes Nagasaki a very enticing place to eat! Try Shippoku, which blends Japanese, Chinese and western elements in one tasty dish. Chanpon noodles are also popular, including locally caught shrimp and oysters.

You can take a day trip to the tiny island of Gunkanjima, which offers a history as a coal-mining community until it closed in 1874. Now it sits empty, a ghost town with a fascinating heritage (and stunning city views!)