Nestled at the foot of Mount Etna, Catania is a tough town that’s managed to survive the multiple waves of invaders who have conquered it over the centuries – not to mention a volcanic eruption or two! You’ll spy Spanish, Greek, Roman, and Arab influences in this Sicilian town’s architecture, from Catania Cathedral to Piazza del Duomo. Beyond that, it’s a great place to relax – whether you’re lounging on the beach, sitting on a café terrace, or having a leisurely wander through the market. As Sicily’s second largest city, Catania serves as a gateway to exploring both mountain and sea. 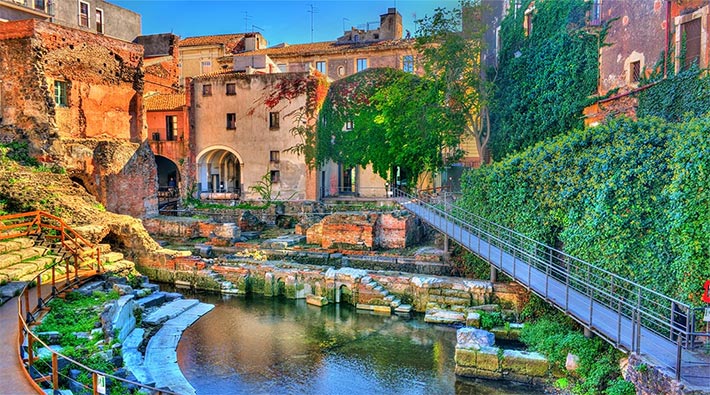 What You Need To Know About Catania

How to reach Catania from the cruise terminal

When cruising into Catania, you’ll arrive in the south of the city. Most large cruise ships arrive at Stazione Marittima, which is also shared with smaller ferries from Italy. This is a fairly central location, near the fishing port and marina, with the city centre just a 10-minute walk away from the harbour. There’s a good public transport system in Catania as well – you’ll find the closest subway stop at the port’s exit for a quick and easy transfer. Many visitors travel to nearby Taormina from here by taxi, or opt for an organised shuttle service to Mount Etna.

What are the can’t-miss sights in Catania?

It’s hard to miss Piazza Duomo! This central square is a marvel of the Baroque style, lined with grand buildings like the Palazzo dei Chierici, Palazzo degli Catania Town Hall, and main cathedral. Be sure to have a look at the central Elephant Fountain in the square. Catania’s coastline features several beaches, one of the best of which is San Giovanni li Cuti with its black rocks serving as reminder of the area’s volcanic activity. Have a wander around the Castello Ursino, a 13 th -century castle that now houses the Civic Museum of Catania, and stroll down the Via dei Crociferi to see the beautiful Baroque churches.

Typical food and restaurants in Catania

Handmade pasta, locally produced wine, creamy gelato and fresh seafood – you’re in for a treat when you dine in Catania! Don’t forget the fresh produce, from blood oranges to massive artichokes. One Sicilian dish that makes the best use of the fruit and veg is caponata, a rich aubergine stew. Orange and fennel salad is a deliciously light lunch option or starter. If you’re a seafood fancier, head immediately to the city’s fish market where you can enjoy your choice of fish. It will be fried up on the spot and wrapped in paper to carry around with you. And be sure to have a cannoli pastry, stuffed with sweet ricotta cheese.

CATANIA - DID YOU KNOW?

There are loads of Roman ruins in and around Catania, but by far one of the most impressive is the Roman Theatre which has been dated to the 2 nd century. It was only recently excavated in the 20 th century, with a ring of steps crafted from marble, brick and lava stone. Parts of it are still submerged under city streets but you can tour what’s above ground. Catania’s fish market is a must-see, whether or not you’re a fan of seafood. The sea and marine life plays an important role in the city’s heritage, making this market an important part of daily life here. You can watch locals as they barter for the freshest cuts and soak in the carnival-like atmosphere. Mount Etna is the star attraction in Catania if you’re an outdoorsy type, ideal for hiking, cycling, and bird watching. You can see this giant volcano looming over the city, and the countryside surrounding it is a protected National Park. Whether you’re in the mood for a leisurely stroll or more strenuous hike, you’ll have your choice of pathways to choose from. If you get to the top, you’ll be rewarded with sweeping views of the city and Ionian Sea below.