Explore all the charms of Italy’s Puglia region with a visit to its capital, Bari. This friendly university town features historic architecture in its old town, a scenic promenade and leafy boulevards lined with bustling shops and restaurants. You’ll definitely want to bring your camera for a stroll around the medieval Murat quarter, all romantic terraced balconies and hidden courtyards. Visit historic churches and Roman ruins alike. The city offers a convenient home base for exploring this lush region of Italy, famed for its olive groves, wheat fields and golden sandy coastline. 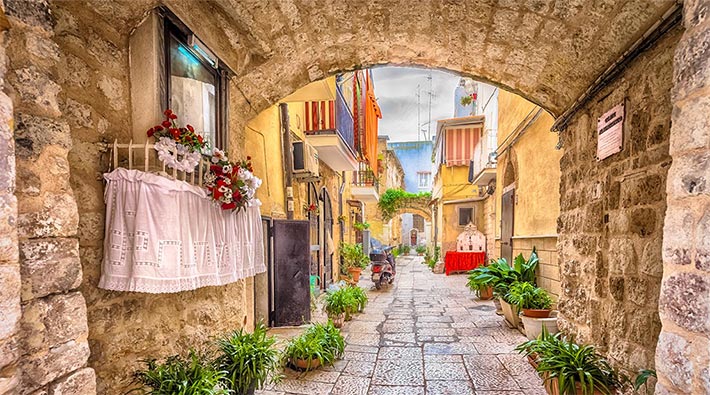 BARI - DID YOU KNOW?

Bari is divided up into an Old Town and a New Town, both of which are very easy to navigate on foot. The New Town isn’t so new as it was founded in the 19th century, but it’s the place to go if you fancy spending a day browsing through Italian designer boutiques and department stores. The main promenade here is the Corso Vittorio Emanuele, lined with handsome villas and offices.

Old Town is the star of the show in Bari, being an authentically liveable community rather than a tourist-friendly museum. Don’t miss the food market here, filled to the brim with plump olives and local produce. You’ll see luscious baked goods in adjacent bakeries, from biscotti to macaroons! There’s also a castle located near the old town walls, dating back to 1240.

Get out into the countryside to see Roman ruins. One highlight is the Roman city of Canosa di Puglia, one of Italy’s oldest cities. It’s believed that the town was settled in the 7th century BC. It takes about an hour to get there by taxi but is worth the journey!

Bari offers a prime location for sampling the traditional cuisine of Puglia, an agricultural hotspot known for its wheat, olive and wine production. Expect handmade pasta with fruity olive oil and plenty of local produce.