Malacca! What do you know and what does it have to offer? Let me share my experience with you. 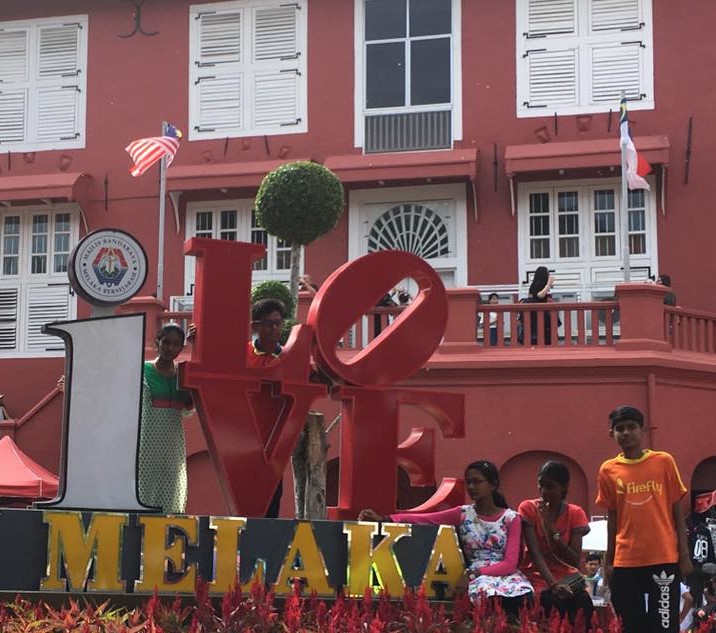 Whilst working on cruise ships I was extremely fortunate to visit some truly amazing and, sometimes some that surprised me.

I had never heard of Malacca before so I volunteered to be an escort on the Walking Tour of Malacca!

It didn’t disappoint.  Malacca (or Bandar Melaka) has a population of around 490,000 and was founded by Paramesware (Prince) who established Malacca Sultanate in the 15th Century.

The current-day city’s economy is largely based on tourism.  Some of the cruise lines that are currently visiting Malacca as a port of call are Royal Caribbean, Star Clipper, Marella, and Costa to name but a few.

So what are some of the places you can see on a Malacca Walking Tour?

The Dutch Square was constructed between 1660 and 1700, the terracotta buildings showcase colonial Dutch style: the clock tower, the statehouse, the church are all coloured a memorable dusty red, with louvered windows and thick iron doors. 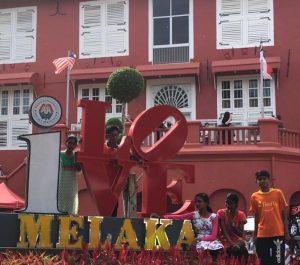 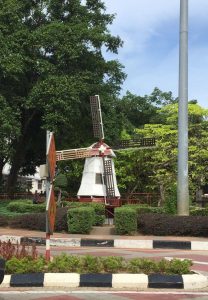 The area is vibrant with lots of energy with Queen Victoria’s Fountain standing proudly in the centre and is one of the few existing structures left in Malacca from the period of British colonization. 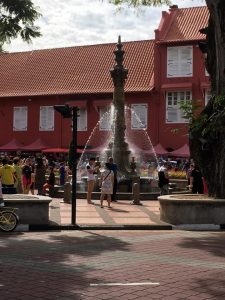 Malacca’s prominent Red Clock Tower is probably one of the city’s most famous sights. It is located on Dutch Square in Malacca’s Stadhuys, or central, district. It was built during the English colonial period. The clock tower was painted red so it would blend with its surroundings on Dutch Square. 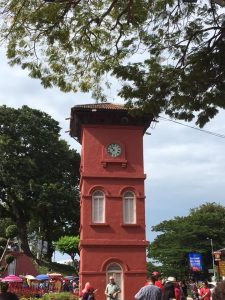 A Famosa is among the oldest surviving European architectural remains in Asia. The Porta de Santiago, a small gatehouse, is the only remaining part of the fortress still standing. The fortress once consisted of long ramparts and four major towers. One was a four-story keep, while the others held an ammunition storage room, the residence of the captain, and an officers’ quarters. 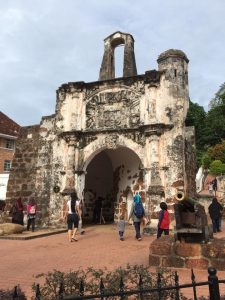 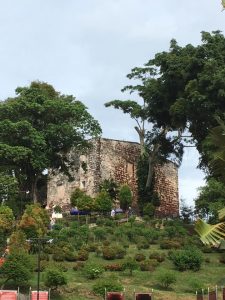 The Melaka Sultanate Palace is a beautiful imitation of the palace that stood during the period of the Melaka Sultanate. Built at the foot of St. Paul’s Hill in 1984, this architectural landmark is now home to the Melaka Cultural Museum, which focuses on the history of the region. 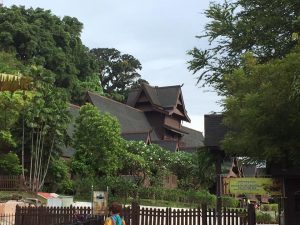 The oldest Chinatown in Malaysia is Malacca Chinatown and it is one of the few Chinatowns in the world located within a UNESCO World Heritage site. 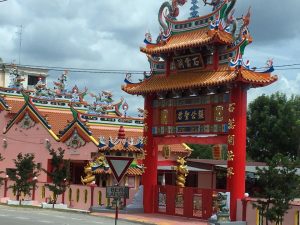 Jonker Street is also known as Jonker Walk or Jalan Hang Jebat (in the Malay language). It is a pleasant street in Chinatown, which is home to a vast array of stores. Here you will find unique antique items, wood-carved statues, household products, clothing, accessories, and souvenirs.

You can also take a fun ride in one of the many colourful trishaw tricycles, from Minnie Mouse to Pokemon, Frozen or even Hello Kitty but there are so many more to choose from. 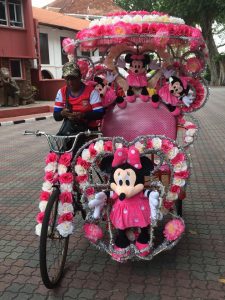 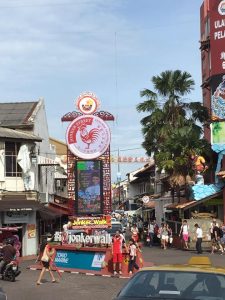 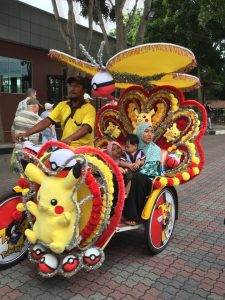 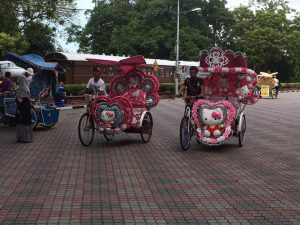 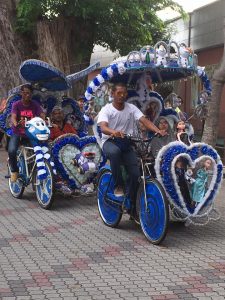 The church was built in 1849 on the site of an old Portuguese church by a French priest, Father Farvé. The finishing touches of the building were completed in 1856 by Father Allard, with the present-day presbytery built-in 1874. 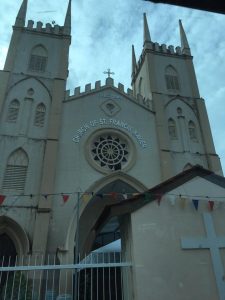 You can also see other parts of Malacca on a River Boat Tour.

One of my favourite places that I try to visit when in a new city is the Hard Rock Cafe and Malacca has one of these too. 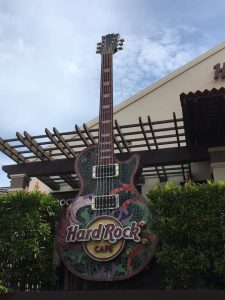 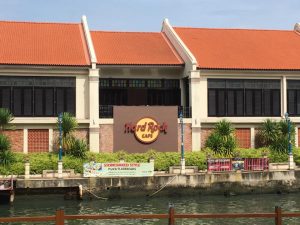 It is part of a massive urban and resorts development project that China and Malaysia are jointly implementing, called the “Melaka Gateway”. The Melaka (Malacca) Port construction project is aimed at boosting bilateral trade, shipping, and logistics along China’s New Silk Road. 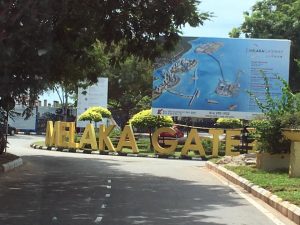 Especially beautiful at morning or dusk, this gold-domed mosque overlooks the Strait of Melaka from its shoreside perch on an artificial island a short taxi or bicycle ride from central Melaka. Completed in 2006, the mosque’s grand archways are panelled with stained glass. When water levels are high, it appears to float. To enter, non-Muslim visitors need to dress modestly and heed the ‘no shoe’ signs. Women must bring a scarf or use a rental shawl to cover their heads. 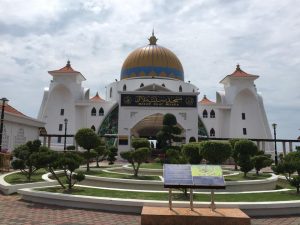 Other places to see are:

The Far East is a wonderful place to visit and you won’t be disappointed.  If you would like any more information on Malacca or any other Far East itineraries please contact me and I will be more than happy to have a chat.

If you have visited Malacca before let me know your views.

← It’s a Sad Day for one of Britain’s Oldest Travel Firms.
Guide/Service Dogs on Cruise Ships! What you need to know. → 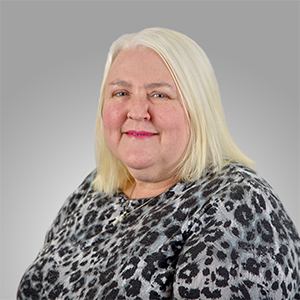 My name is Lyndy and I have worked in the travel industry for eight years, three years of these working on a cruise ship.  I enjoy cruising and have had many wonderful experiences both as a passenger and as a crew member (but that's another story). I returned from sea in January…