So if you’ve been following my blogs, you will know that I was invited on board Cruise & Maritime’s latest addition to the fleet – Columbus. To sample the facilities on board, including a sumptuous Lunch & Dinner, as well as an overnight stay.  Many of my colleagues had attended the first night festivities on the 8th June, including Fireworks and some lookey-likey celebrities, Caricaturist (if there is such a word?) so it all looked like a fun day and night was ahead of us. 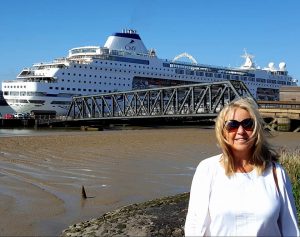 The day started off well enough.  We arrived around 10:00am and after a short wait at the terminal, we were allowed on board.  I went straight to Reception to ask for access to my cabin which had been pre-booked, as I wanted to freshen up and change for the Gala Lunch. Unfortunately but understandably as I had arrived early, I was told that the cabin wasn’t ready , but could have the use of it temporarily to get changed, and to come back later as it hadn’t been prepared.  Fair enough.  So off to the Waterfront Restaurant where we were treated to a very delicious lunch. 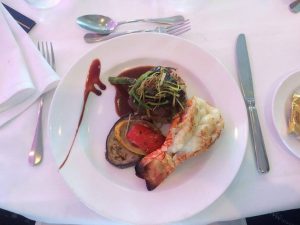 After lunch it was  time to explore the ship.  I can’t fault the public facilities on board this ship.  They were excellent. I particularly liked the Dome Observatory Bar, fantastic views, as expected and a great late night venue.  The Palladium Lounge is spacious and well designed. The  Entertainments  Troupe put on a tribute  to the  80’s sounds, which went down very well with the audience.  The ship is very easy to navigate around, with plenty of  places to sit and take in the views.  There’s a lovely Coffee Shop up on deck where you can sit and relax with a speciality coffee.  There’s even an Ice Cream Kiosk!

With 775 cabins including Deluxe Balcony and Junior Suites, the cabins that I managed to see were spacious and light.  Cruise & Maritime have recognised the needs of Single passengers by allocating no less than 150 cabins for solo use. 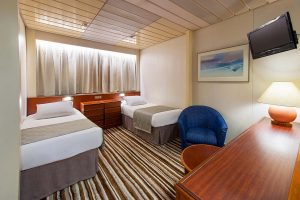 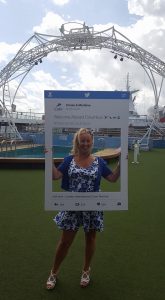 As this ship is advertised as a ‘Multi Generational’ ship, where parents/grandparents can bring along their children, (Although only in the Summer school holidays)  I thought I would see if there were any facilities for the kids to keep them amused.  – There were none which to be fair Cruise & Maritime do point this out.    Although we did happen across a room with 2 x Games Consoles in the form of ‘Racing Cars’ where you wear helmets and drive along a virtual track.  Whether this facility was specifically there for children wasn’t clear.  I could find nothing else to keep them amused and entertained except of course for the Lido deck.

Lido Deck with Movies Under The Stars Screen & 2 pools 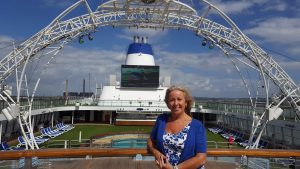 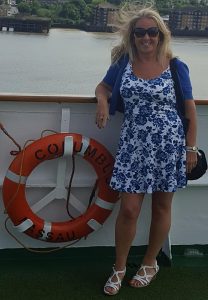 Telescopes to hone in on the views! 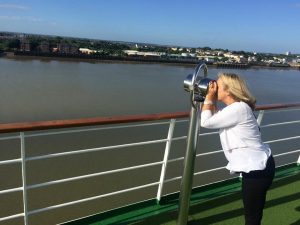 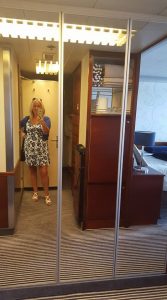 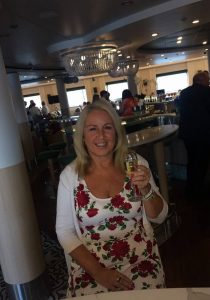 ← All Aboard Cruise & Maritime’s Columbus!
On Board Bookings & Future Cruise Deposits – Good Value or Marketing Ploy? → 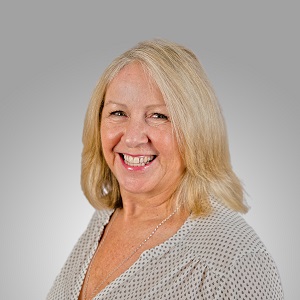 I started working at Cruise.co.uk  in January 2014 and thought you might like to know a little bit about me..... I was born in London but as a child spent a great deal of time playing in the Hopfields of Kent while my parents worked on the farm.  In fact…