Many of you may know that my love of cruise ships started with the Love Boat when I joined my first ship in Vancouver in 1991 aboard the Pacific Princess, followed by the Royal Princess and finally the Regal Princess. 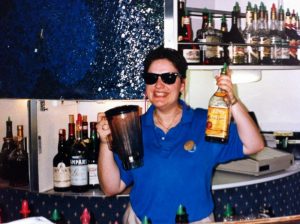 Here I am in the Starlight Lounge on board Pacific Princess. This was a lounge at the top of the ship and was where the guest entertainers used to perform. One of my best recollections was of an entertainer called Chris Nicholson from Liverpool who was giving a great rendition of Tom Jones, Delilah, which we enhanced by throwing loads of knickers at him! A true professional he managed to sing the song right to the end and I am glad to say he still works for Princess at their Head Office in Los Angeles as a recruiter for new acts. 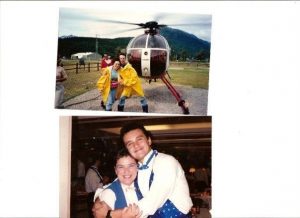 Probably one of the best things working at sea is the lifelong friendships that you make as you are working and living with these people in a confined space 24 hours a day. Here I am about to board a helicopter in Juneau, Alaska, with my friend Ian and below that a quick cuddle with one of the waiters, Raoul, who is now a Mayor in his home town in Mexico. 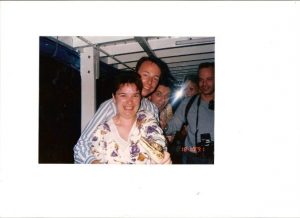 I got to visit some amazing countries and here I am being brave in a tributary just off the Amazon near Manaus putting my Caiman hunting skills to practice. 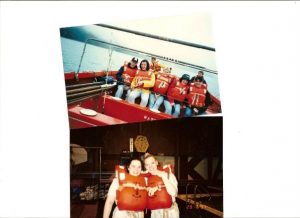 Every new crew member that joins has to undergo a Sea Survival course and as a non-swimmer I can tell you that this is the scariest thing I have ever done. I had to step off a diving board 30 foot up into a pool then haul myself into a life raft. The bottom photo above shows me having just jumped in with a Body Basher otherwise known as a Beauty Therapist. The top photo shows us in one of the lifeboats which we borrowed from the ship to do some fishing in Whittier, Alaska. The gentleman at the back on the right was the Navigator on the ship at the time called Ivan Jermyn and I believe he is now a Captain as he performed a renewal of vows ceremony for some lovely clients of mine a few years ago. The funniest thing about this day is that half way back to the ship Ivan told us we had lost engine power and he made us row back! 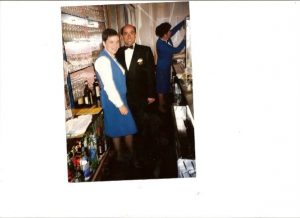 This is me with yet another hairstyle with the Maitre D, Lorenzo Tarini, who insisted when we were doing the wine vouchers to have his hand constantly on your knee! These days it would be construed as sexual harassment but back then you just got on with it and made a joke of it. Even to get to the dining room where I worked as a Sommelier I would have to run a gauntlet of waiters and chefs shouting, “Ciao Bella”. On a ship of 300 crew only about 15 were female! 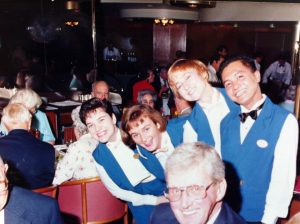 This was one of our favourite pastimes in the restaurant. When the photographers where taking the passengers photos we would try and get in as many as possible as discreetly as possible. Think we were caught out on this one. I am on the left here and my good friend, Lorna, is next to me. She is currently in Thailand having spent some time with her husband in Goa looking after street dogs.

Champagne waterfall night was always a busy night as we had to build it in between sittings at dinner and many a night we saw it come crashing to the ground. The secret of a good tower is sugar syrup which we sprayed it with so the glasses would stick together. Here is one of the sommeliers, Bruce, who was my boyfriend at the time and later became my husband (still married after 28 years together). 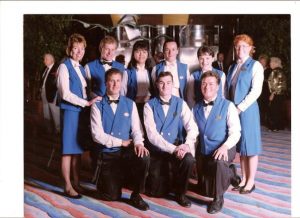 This one is on the Royal Princess just outside the restaurant and at the bottom of the spiral staircases. I am second from the right and Bruce is in the middle on the front row.Out of 9 people in this photo there are 6 of us that are in touch regularly. Friendships at sea really do last the test of time. 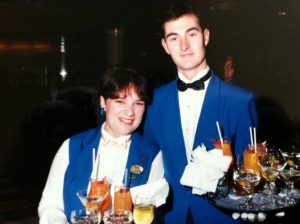 I suppose I have to end my quick snapshot of working at sea with Bruce and I on a Captains Cocktail Night. Please note how tidy my tray is compared to his. This was always a joke between us as he would pile the drinks on his tray so he did not have to make as many returns to the bar. Nowadays they only provide champagne whereas in our day you could have whatever you wanted.

Hope you have enjoyed a quick trip down memory lane with me.

← Goodbye Costa Rica – and how to help the Planet!
Unruly teenagers spoiled my cruise!! →