As part of my job I always do a Welcome Home call with my clients to check that everything ran smoothly and recently I had several comments on why some of my clients felt their cruise had been ruined! 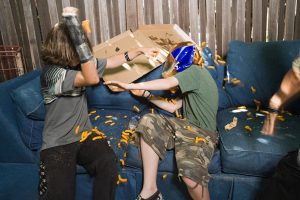 Now as a mother of four children, three boys and a girl, I am used to living in a mad house where the only way to be heard is to shout, and everyday I run the gauntlet as disagreements dissolve into fisticuffs with me in the middle separating them. Although as they are getting older it’s just the youngest two boys that are guilty of this now.

What I accept in the comfort of my own home is different to what I expect on holiday and that’s why when I recently spoke to one of my clients I was disgusted to hear that her cruise had been ruined by hordes of teenagers seemingly running amok. Now I would normally take things like this with a pinch of salt however I did five Welcome Home calls to people who had been on the same ship of which two were families who all said the same.

Apparently there was a large family group on board whose parents decided that once on the ship that this relinquished them of all parental responsibility. This then gave free rein to over 20 teenagers ranging from 12 -15 to run riot. They decided that there were no rules so were jumping in pools, hogging the jacuzzis and riding up and down in the lifts and playing knock a door run.

Whilst I understand that these are children playing, what I have to do is compare their behaviour with my own children, who are told that when they go on board that the minute they disrupt someone’s holiday they will have their limited freedom taken away and will have to remain at my side for the duration of the cruise.

In an ideal world the parents should be responsible for their children as they would be the first to try and sue the cruiseline if one of them was injured however in this instance I believe the adults were as bad as the children. If this is the case then it is down to the crew to police the actions of those involved but unfortunately crew members like Pool Attendants and Cleaning Staff who would be witnessing the jumping in pools and riding lifts are scared of doing this in case the parents complain about them.

However I am pleased to say in this instance that common sense and a sense of justice prevailed as local police and security officers from the ship were given  permission by the Senior Officers and Captain to disembark the unruly group in the next port that they docked in. By all accounts the group of 52 were very sombre as they were escorted off the ship and left on the dock side to organise their own arrangements.

Do you think the Captain made the right choice?

Do you think they should have been given assistance to get home?

Have you ever experienced this?