Things you won’t see on a cruise ship anymore?

My husband and I were chatting last night about some of the things that have died out on cruise ships or in the process of being stopped and these were the top few we came up with. 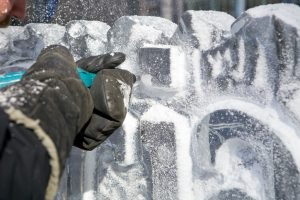 Whilst you may see a few on a galley tour this is usually the only time. In times gone past huge chunks of ice were brought up to the pool area and a highly skilled crew member would begin to hack away at the block whilst you tried to guess what it was. This activity used to draw huge crowds with people shouting out what they thought it was going to be. Often you would see dolphins, birds and even the cruise lines logos. When I worked for Princess  they always used to do the Sea Witch logo.

Can you imagine being handed a loaded gun on the pool deck? Well it did use to happen several years ago. It was an extremely popular activity and took place on the aft end of the ship and usually on a sea day. Normally manned by an officer guests could pay just a few dollars to shoot clay pigeons out of the air. Warnings were placed around the ship during the activity just in case people thought they were being boarded by pirates!

Whilst lots of ships now have digital driving ranges and netted areas dare I say it but in the olden days of cruising you were allowed to drive the golf balls of the ship. It wouldn’t happen today for a variety of reasons including health and safety as often a portion of the ship’s rail would be taken away so the guest had a clear shot of the open water. The guest would normally wear a safety harness of some description just in case! This stopped several years ago as we became more conscious of the damage we were doing to our oceans and for a short time biodegradable balls were used but they proved far too expensive and the activity was stopped altogether.

Although you can still get food 24 hours a day on most cruise ships there does not seem to be the excitement or fanfare of a midnight buffet anymore. In days gone by this would be a huge crowd pleaser with the opportunity of the chefs to show off their amazing ice and fruit carvings along with their culinary skills. It would often take place on the open decks and people would queue to take photos before demolishing the buffet. Sometimes it would be themed such as a chocoholics buffet.

I remember when working on the old Royal Princess and Pacific Princess in the 1990’s how low the ceilings were in the main dining room due to the constraints of ship building at the time. Now you have three deck high open planned dining rooms with huge chandeliers as Naval Architects push the boundaries of ship design. We have climbing walls, surf machines, machines you can fly in, trapeze schools and all sorts of other weird and wonderful items. I often wonder what they will bring out next!

What do you miss that is no longer available to do or are there somethings you think should be stopped?

Let me know by writing in the comments below.

← Wash, rinse, sanitise and repeat!
The most ridiculous complaints ever! →

10 Comments on “Things you won’t see on a cruise ship anymore?”