The good, the bad and the ugly of table companions!

I love cruising and I love meeting new people. One of the biggest draws of cruising is meeting different people from different backgrounds whilst in the dining room. Over the years I have met some amazing people and on the flip side I have met some downright rude people at the dinner table. Here are a few of my memories starting with my favourite table companions: 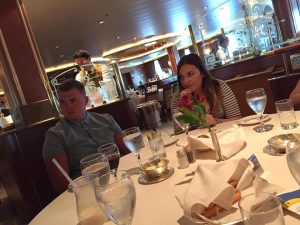 Work colleagues – here on board Majestic Princess, although trying to get a word in edge ways with 9 travel agents is hard work 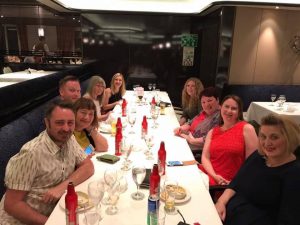 Moving on to a few stories I would like to tell you about my cruise with Seabourn and my table companions. In 2001 my husband and I travelled on Seabourn Pride from New York to the Bahamas. When we boarded the ship we realised we knew the Maitre D having worked with him when we both worked for Princess Cruises in the 1990’s. As such we were placed on several Senior officers tables during the course of the cruise. One particular night we were sat with the Doctor on his table and I was sat next to him with an American lady on his other side. All night long she stared at me as she cut me off in the conversation at every opportunity, to the point she made it uncomfortable for the rest of the table. She ended up asking me how many cruises I had been on to which I replied over 100 (she did not need to know that I had worked on a cruise ship) and then she asked me how could I  afford it! I threw the question straight back at her and she answered she was in Real Estate and worth millions. She then asked me what I did so I told her that I worked for the government and if I told her what I did I would have to kill her. She never spoke to me again.

Whilst on the same cruise we frequently had an elderly lady sit on our table most nights. She was in her nineties and was an amazing storyteller and a lovely person but she had the worst fitting false teeth I have ever seen and every time she ate and spoke she spat food all over us. It got to the point to where unfortunately I started avoiding her.

On one particular cruise with my husband we were sat at a table of eight with 3 other couples of which one of them was a gay couple. They were amazing young men in their early thirties and again had some great stories. They were always impeccably dressed in designer wear every night and on the night before formal night they intimated that their clothes would be amazing. Formal night arrived and as usual they were last to the table. We joked that they would be in pink Versace suits when all of a sudden we heard a commotion at the entrance to the dining room and here they were …… in bright red sequinned dresses with blonde wigs and Christian Louboutins to match.

Finally I read a story on one of the many travel agent sites recently as follows by one of my fellow agents:

I’ve heard it all now.  Just had two clients return from a cruise. They were allocated a table for six in the dining room and one of the couples, also allocated on the table, turned up with a laminated piece of card, which they stood on the table each evening saying ‘WE DO NOT SOCIALISE.’

Other than ordering with the waiter, they didn’t hear them speak for 9 nights…. ?

Whats the best and worst table companions you have had?

← Rescued by the RNLI – a naughty dog story!
Disgusted by not enough toilet rolls and gaudy curtains!! →

2 Comments on “The good, the bad and the ugly of table companions!”