Rescued by the RNLI – a naughty dog story!

Morning- my name is Miley and I am a mischievous three year old black Labrador. I live with my humans in Morecambe – I have a human mum, dad, three brothers and a sister plus my playmates Bubble and Squeak the Guinea Pigs and my arch enemy, Flash , the rabbit! 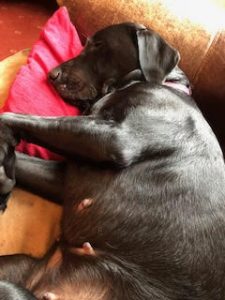 As you can see I am a pretty laid back kind of dog and love spending time with all of my humans. I love it especially when they take me for walks down our lovely promenade here in Morecambe, Lancashire. 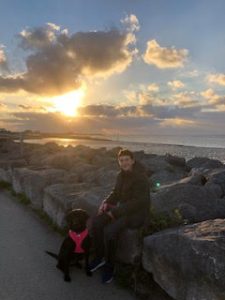 Me and my human brother – Logan

Morecambe is beautiful and has an amazing bay that allows me on the beach at certain times of the year as sometimes they reserve it just for the humans only to enjoy. 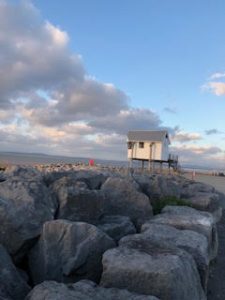 What I love most about the beach is the water but this is when I get a little bit naughty as I suddenly get selective hearing and refuse to listen to my humans!

Just a few months ago two of my humans took me for a walk, my human Dad and my human baby brother, Frazer, aged 11. Once we got to the beach I could see the water and smell the sea air and was desperate to be let off my lead and go for a swim. My human Dad told me to sit, so I did, and once he had took my lead off he told me I could go and play. I started jumping in and out of the puddles then I saw the big sea and just ran and ran till I reached it and jumped in.

I could feel the current but I am a strong swimmer and began to paddle around. I could hear my humans shouting but I think they were just telling me to have a good time. I swam further and further out and my humans were getting smaller and smaller. I had been in the water for about 20 minutes when I heard my big brother human, Conor, shouting of me. I was really surprised as he was riding on a big orange whale. I thought I was in trouble so I swam away from him but they were too fast for me and caught me up and hauled me up into the whale. I was quite pleased to see my human as I was starting to get tired but soon felt sheepish when he started telling me off! 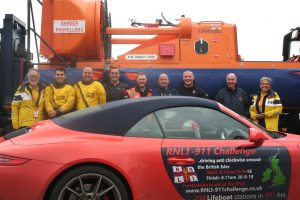 My human Conor is in the middle with the big orange whale at the back.

They took me back to shore and let me go and I had big hugs with my other humans before my big brother Conor started telling them off as well. Now I am not allowed to swim in the sea anymore as I have been told I scared them so much that my little human, Frazer, was going to come in after me and that would have not been a good idea. I was glad to get home later and my humans did not stay angry with me for long. 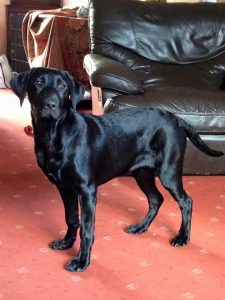 They later told me that the big orange whale was a hovercraft and I am very lucky that my big human brother, Conor, is a crew member. They work for someone called RNLI who rescue anyone in difficulty in the sea. Dogs, cows, sheep, horses and even cats!!

Have a look and watch this – aren’t they amazing?

← Do you like a good Rump?
The good, the bad and the ugly of table companions! →