Is complaining on a cruise acceptable?

Of course complaining on a cruise is acceptable but how do you justify acceptable? 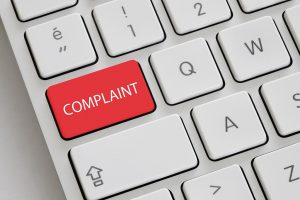 Recently in the news there was widespread footage of a gentleman screaming in the face of a senior officer onboard the cruise ship Norwegian Spirit.

The cruise was on a 14 night Mystical Fjords cruise departing Southampton on 27th September and was due to visit: Amsterdam, Bergen, Flam, Geiranger. Akureyri, Reykjavik, Belfast and Dublin.

Unfortunately due to excessive high winds the ship had to miss Amsterdam and then called in at Bergen, Flam and Geiranger. She then had to miss both Icelandic ports due to unprecedented bad weather from Hurricane Lorenzo which caused  significant swells, high waves and storm surges that led to some coastal flooding and damage, especially along the western and southern coasts.

The Captain attempted to take the ship into Greenock instead for Glasgow but again due to bad weather had to divert straight to Belfast and then Dublin.

Now this is where it gets sticky as yes I believe you have a right to complain but the way that some people were complaining was not right. The footage on the video shows one gentleman shouting, “Why you picking on me?”, to a Senior Officer before he begins chanting, “You are a liar”, and then encourages other guests to join in.

This quickly escalates into a mob mentality with people screaming and shouting at the crew. Now if that Captain and Officers had attempted to take that ship into the ports when the weather was as bad who do you think would have been complaining if they had got hurt.

The Captain is responsible for not only the ship but all the crew and passengers and if he decided that it was not safe to get into port then he is the expert not me unless you have a meteorology degree and Masters Certificate then you are not qualified to make that judgement.

Personally I think the ringleaders should have been put off at the next port and made to find their own way home for the way they behaved.

If my child had spoken to the Officers in the way this man did they would have been grounded for eternity.

Would love to hear your comments?

By the way Norwegian did offer a 25% refund for every guest on board.

25 Comments on “Is complaining on a cruise acceptable?”