Goodbye Costa Rica – and how to help the Planet!

This is the last in my three instalments of my recent trip to Costa Rica and I have a lot to cover. 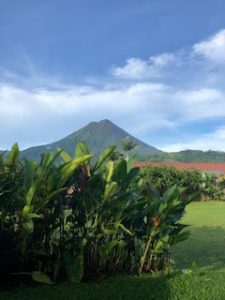 Day 3 and 4 were spent at the amazing Arenal Springs Hotel with a volcano right outside our door!!

Our first night involved a trip to Tabacon Hot Springs and the higher up the springs you go the hotter it is. BEST TIP: take water shoes with you as the bottom of the springs is volcanic rock and can be sore on your feet.

The next day we were off on another boat ride down the Rio Frio (Cold River) and we saw so much from sloths to toucans and cheeky Capuchin Monkeys. 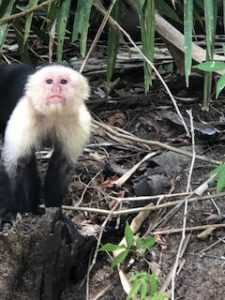 This was just before it started showing its teeth!

Day 5 was a four hour drive up into the cloud forest at Monteverde where the temperature cools down by several degrees. We stayed at El Establo. 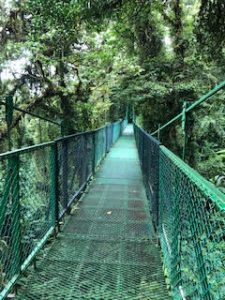 One of the many suspension bridges

The day consisted of a 2.5km walk through the cloud forest across a series of 8 suspension bridges high above the rainforest canopy.

The evening  was a bit of a wash out literally as we went on a night walking tour where we saw a green viper, head lamp click beetles, crane fly, crickets, firefly and stick insects to name but a few but then had to abandon it because of the sheer volume of rain. 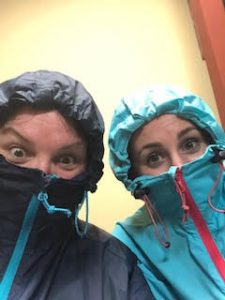 My colleague Bex and I ready for the night walking tour.

Day 6 was one of my favourite days as we headed to the Nicoya Peninsula. The roads were horrendous and were just gravel paths and zero visibility till we had descended the cloud forest but I have to say I felt very safe in our guides hands. 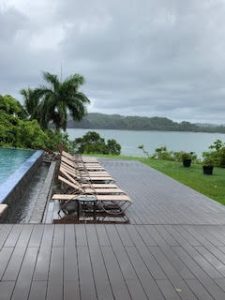 Hotel Nammbu with a view towards the Pacific Ocean

Our hotel tonight was called Nammbu and the rooms were huge and the hotel had direct access to the beach and the Pacific Ocean. After lunch we headed out on a 20 minute drive to Camaronal Wildlife Refuge which is a government run sanctuary to help save turtles specifically the Olive Ridley.

Team Cruise.co.uk along with our Intrepid guide, Fran, do our bit for the turtles.

The refuge is run by a guy called Stuarth who was extremely dedicated to his work and we helped dig out new soil for the hatchery. The hatchery had several areas where the nests had reached their incubation period and the staff began to dig looking for babies. Out of 56 eggs we were only able to find one survivor. In the wild this is reduced to one in a thousand!!

Day 7 we headed off to Manuel Antonio and our hotel Si Como No which was over 6 hours away and spent the rest of the day relaxing by the pool.

The next morning we headed out on a Catamaran with Sunset Sails looking for whales and dolphins. we were really well looked after with fresh pineapple and amazing cocktails before enjoying a fresh fish or chicken lunch. Once we arrived in a sheltered bay the Captain dropped anchor and people were able to go snorkelling and all equipment was provided for. After this we headed back to San Jose for our last night.

What did I learn from my trip:

← Why should you take a bin liner to Costa Rica? and other tips!
Working at sea……in pictures! →