It has been announced that Saga is going to be building its first ever River Cruise Ship which will be cruising the European Rivers in 2021. This is an exciting time for Saga having launced Spirit of Discovery this year and launching Spirit of Adventure next year, these being their new build boutique ocean cruise ships. Unlike other River Ships “Spirit of the Rhine”, as she will be named, will have all French Balcony Cabins with floor to ceiling windows to ensure that passengers enjoy the surrounding scenery even from their cabin. Other river cruise lines have cabins on the lower decks that just have a window so an all balcony ship will be something special.

The ship will have 95 cabins to accomodate 190 passengers so will have the same intimate feel as their ocean ships have. Facilities onboard will include a lounge with bar, a seperate library area a large sun deck with jacuzzi and also a barbecue with extensive seating areas. The ship will be built by a dutch-founded company Vahali who have been building river ships since 1923 and she will be sailing on the Rhine, Moselle, Main and Danube and also the waterways of Holland. 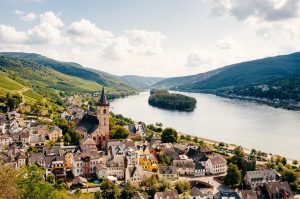 Wine Beer and Soft Drinks will  be included with lunch and dinner with gratuities included and VIP transfers will be included as standard. Apart from the main restaurant onboard there will also be an A la Carte restaurant that seats 34 people and this will also be free of charge, unlike some cruiselines where you would normally have to pay a cover charge for this.

Pre-registrations are  already being taken for this ahead of the itineraries being released on 2 December. What are you waiting for give me a call and register your interest now!