Have you been arguing with the kids about whether to visit Disney World or to go somewhere tropical? Why compromise? With Disney Cruises you can do both! Their fleet of four ships now cruise to numerous locations including: Canada, Baha and Disney’s own private Island Castaway Cay!

Still can’t decide? Disney even offer the option to do half cruise, half park stay. Read on to learn why it’s the end to family holiday dilemmas… Disney has its own private island called Castaway Cay in the Bahamas and it’s packed full of stuff to do for all the family. There’s open air BBQ’s for Dad, massages on the beach for Mum and Lilo and Stitch dance parties for the kids! There’s even an adult only section with its own bar, giving you the perfect opportunity to unwind and have some well-deserved peace and quiet!

Did you know? You can even mail a special souvenir message to family and friends back home by using the Castaway Cay Post Office. Now that’s impressive!

There’s Entertainment For All

Quite possibly one of the main attractions on a Disney cruise is its entertainment and each night promises something different. Watch an award winning Broadway style performance of your favourite Disney film, including firm favourite Tangled and the classic Aladdin! For the adults there are also nightclubs, karaoke, comedy and cabaret nights!

Worried about missing out on Minnie or Mickey? They’ve got you covered! There’s loads of designated areas around the ship to meet them. Aboard Disney Fantasy you can visit the royal court for a tea party with princes and princesses! Now that’s what we call Royal Tea! Raved about by parents and children is the Pirate Night! Have your very own swashbuckling adventure aboard the ship and learn to sail the high seas Captain Hook style! We hear the fireworks display is mesmerizing…

One of the best parts of the Disney cruise is that all food and drink is included in the ticket price! So it’s perfect for those who tend to go a bit overboard at the parks, due to the huge amount of choices. Guests are allowed to rotate through several restaurants during their stay, so you don’t have to dine at the same place twice!

What’s more – your waiter will stay the same, giving you more of a personal experience!
Among the options are restaurants dedicated to your favourite characters. Fancy some French cuisine? Head over to Lumiere’s –named after the candlestick in Beauty and the Beast! There is also adult only dining available for those all-important date nights.

Did you know? The fun never stops on a Disney cruise- even dinner is one big adventure! There’s a restaurant on board called The Animators Palate which has holograms on the menu, and images on the wall that move!

There’s Loads to do for Kids and Teens!

One of the most talked about features is the unrivalled experiences available for kids and teens. Catering for those aged between 6 months to 17 years old and with activities available from 9am until midnight, you don’t have to feel guilty about ditching the kids for a day at the spa! From day care centres, where you can rest assured your toddler is having fun with Disney princes and princesses.

To the exclusive teen club ‘VIBE’ where the older ones can play video games, watch TV and make new friends! Still worried about leaving the kids? There’s an on board paging service meaning your child can contact you if they need!

The line have even introduced the first Marvel day at sea celebrating the adventures of the legendary Super Heroes and Super Villains from the Marvel Universe- click here to read about this new realm of possibilities!

Not Forgetting the Adults!

There really is something for everyone aboard a Disney cruise ship, they’ve even thought of the adults! You’ll find pubs and nightclubs with the coolest themes, chill out in the evenings at the 1950’s themed piano bar, Cadillac Lounge, with it’s awesome classic car theme. (You can even read about Disney kicking kids off the ship for some strictly-adult wine-and-dine sailings here!)

For the British people out there feeling homesick, visit The Tube – a British themed pub. But that’s just the tip of the iceberg as there’s also cosmopolitan lounges and Irish bars that show live sporting events!

Did you know? A third of the guests on board are adult only couples with no children! You’re never too old for Disney…

Boasting larger staterooms, Disney claim to cater for families better than any other cruise line. In the cabins you’ll find multiple sleeping arrangements, including: fold out couches and bunk beds. There’s even two bathrooms so you won’t have to fight to get ready in the mornings when you’re hurrying off to the spa! Where at the park there’s rooms dedicated to Disney characters and films, the touches on the ships are a lot subtler. See if you can glimpse Nemo through one of the animated portholes! If you enjoyed finding out about why a Disney Cruise tops Disney Land itself, you’ll enjoy these articles too…

Everything You Didn’t Think You Needed To Know About Disney!

The Time Disney ‘Dreamt Even Bigger’

So now you know you can appease everyone with a Disney Cruise! Would you consider a Disney Cruise as your next one? Or have you been on one already? Do your kids love the characters that float around the ship? We’d love to hear your thoughts! 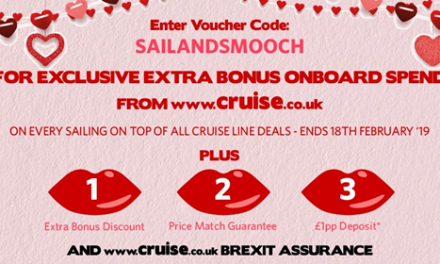 Happy Valentines From Us To You With Exclusive Discounts!

Consultant in the Spotlight: Say Hello To Barbara Hopley