What if the Quantum of the Seas Wasn’t a Ship….? 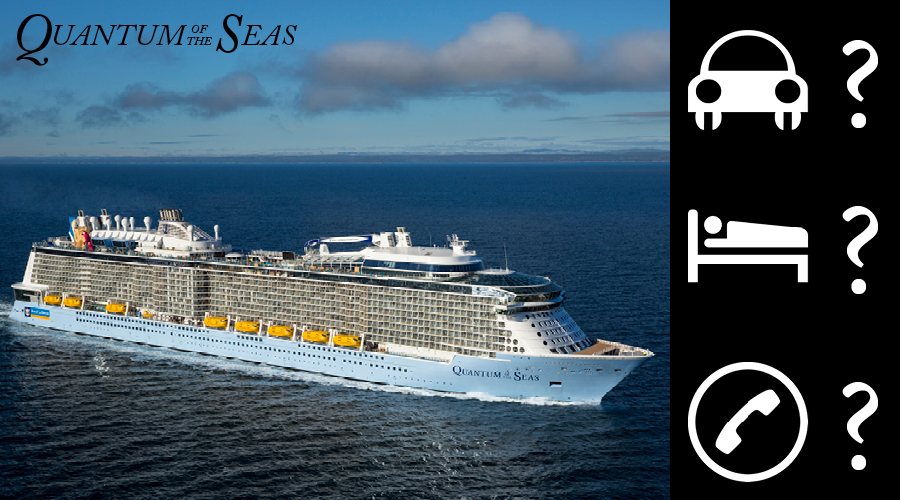 If you’re an avid cruiser (or a wannabe waiting for the right time to head out across the oceans) you’ll have heard about the new Royal Caribbean techy megaship Quantum of the Seas by now (sister ship to Anthem of the Seas which will be based in Southampton from 2015).

In fact, with her glorious hull being plastered all over cruise sites (ahem) and news websites, you’ll probably know quite a bit about Quantum, regardless of whether you’re planning a cruise or not.

Over the course of her build, we’ve learnt about the features she’ll be boasting and what else we can look forward to when it comes to the Quantum class fleet – have we mentioned that Anthem of the Seas will be launched for Southampton sailings in spring next year?

Oh well, it won’t hurt to mention it again!

No matter how much you’ve already read about Quantum (and if you follow this website that’s probably quite a lot!) it can be difficult to imagine what it will be like to actually cruise on her.

What does the Quantum of the Seas offer her cruisers, in real terms?

Can www.CRUISE.co.uk compare her to things we see and use every day? Like, say, a phone? A car? A hotel or a supermarket?

Well guess what? We’re going to give it a good go!

If Quantum was a Car…

…she’d be KITT, from Knight Rider!

OK, so this car may not technically be real but it should be!

Back in the 80s, KITT was THE make-believe car, with all of its hi-tech gadgetry and futuristic features.

Essentially, this Hoff-tastic car was a supercomputer on wheels, which is exactly what Quantum is…just swap the wheels for Azipod propulsion systems, obviously!

KITT was programmed so that he could communicate with humans and although he was just a glorified robot, he was able to learn and interact with his driver (i.e. Hoff’s character, Michael Knight).

The car’s dashboard also had an entertainment system built into it, which included music and arcade games – perfect for when Michael wanted a bit of down time!

Quantum has plenty of robots onboard, too – including the bot arms in the Bionic Bar which mix your drinks for you. Also onboard is the ROBOSHOW, made of six articulated robotic arms that can be choreographed to move and dance along with the music in the Two70 lounge, creating a visual spectacle unlike anything else at sea.

With the help of the onboard apps, like Royal iQ, cruisers can navigate the ship and make reservations, whilst the Microsoft tablets that are being given to the crewmembers will help them to store any guest preferences that could come in handy during that cruise – computer communication with humans, almost!

Combine that with the entertainment systems that are on deck, including the awesome SeaPlex complete with a SeaPod that is home to an Xbox Live room and a floating DJ booth that can play music until the early hours and you will see why, if Quantum was a car, she’d most likely be KITT – except even more innovative.

You won’t find a skydiving tunnel or an observatory pod on KITT, will you!

Let’s not forget that KITT is a retro classic… a bit like the bumper cars and Roller Disco that can be found on deck 15 of the Quantum of the Seas in the SeaPlex!

Retro is back, cruisers!

If Quantum was a Phone…

Packed with features old and new, both the Quantum of the Seas and the iPhone 6 have been created by masters of their craft.

Royal Caribbean have long been frontrunners (or should that be front-sailors) in their field, as have consumer giants, Apple.

Whilst the iPhone 6 has been considered, by some, to be a bit of a step-back when it comes to Apple’s technology, there’s no denying how many features it packs into its shell (however bendy it might be!) with apps for every requirement and astounding visual technology, thanks to a higher resolution retina display – among many other tech advances.

Meanwhile, the Quantum of the Seas welcomes back some familiar facilities that can be seen on some of RCI’s other ships, including the FlowRider surf simulator, a rock climbing wall and plenty of speciality restaurants, such as Chop’s Grill and 150 Central Park, in which you can get your fill of gourmet grub.

However, the Quantum’s brand-spanking new features are where the excitement really lies.

Need we mention the skydiving tunnel again? Or, perhaps, you need to be reminded of the virtual balconies, the Dynamic Dining concept and the Bionic Bar.

The list of WOW features on Quantum is endless and cruising on her is likely to be even more exciting than bagging a new iPhone on launch day.

Quantum of the Seas doesn’t fall short when it comes to internet connectivity either.

Usually, a ship may struggle to match the connectivity that an iPhone 6 can hold the bragging rights for but not with the Quantum-class.

Her Wi-Fi matches speeds that can be found onshore, thanks to dedicated mid-Earth orb satellites that provide a connection that won’t chug (with 140m/s latency).

That means that using FaceTime doesn’t have to be limited to when you’re on land – you can stay connected, whether using your iPhone 6 or another device, at sea, too.

If Quantum was a Hotel…

…she’d be Novotel in Blackfriars.

This London hotel is an official partner hotel of Shrek the Musical (whom you might find onboard Quantum alongside Donkey and Fiona as part of the DreamWorks experience!).

It may be one of a chain of hotels but if you think about it, so is the Quantum – the latest liner to be launched by cruising giants, Royal Caribbean.

The Novotel in Blackfriars is incredibly child-friendly, with children under the age of 16 being able to bunk up for free or if they are old enough to be granted that little more independence, you can book them a second room at half the rate you paid for your own room.

The hotel also boasts a self-check-in service, digital art, a virtual concierge system, iPod docks and an iMac corner and video depicting underwater scenes along a wall that faces the hotel swimming pool.

Do any of these features sound at all familiar?

The Quantum of the Seas is super-flexible and family friendly too, with interconnecting rooms that can allow for both privacy and independence when you need it, without worrying about the kids being left to their own devices for too long (any parent will know how much mischief they can cause if left unattended when the DreamWorks movie has finished showing on the cabin flatscreen!).

Not only that but you can also shorten your check-in time onboard by uploading a selfie to the Cruise Planner app before you sail and with no documents or paperwork to complete, you can be onboard with a pint within ten minutes.

You don’t even have to keep checking where your bags are, because the RFID tracker on your Royal iQ app will keep an eye on them and give you an ETA for their delivery to your stateroom.

The Quantum also boasts ship-wide digital art for culture fans to browse, with an overall theme of ‘What Makes Life Worth Living’, encompassing three mediums, including video, interactive and kinetic.

She’s also got her own virtual concierge, with the Royal iQ app allowing guests to make table reservations and book spa treatments with ease and whilst the Novotel may have a video depicting underwater scenes next to the pool, the Quantum has a Visto-rama, made up of 18 projectors and floor-to-ceiling views of scenes that can change quicker than you can say ‘WOW’!

Let’s not forget the virtual balconies!

The real-time ocean scenes that are shown on these inside cabin digital ‘windows’ may be above surface level but they’re still pretty special.

If Quantum was a Supermarket…

What else would she be?

Quantum’s Dynamic Dining setup means that you can tuck into whatever cuisine you like, much like you can when you do a shop at Waitrose.

The supermarket’s ‘Essentials’ range, which offers good quality food at budget-friendly prices can be compared to the liner’s complimentary offerings, such as Asian-inspired Silk, the American Icon Grill that dishes up US faves, and The Grande, for when nothing short of elegance and decadence will do.

Waitrose’s range of top quality, high end food from all corners of the world can also be compared to the speciality restaurants which can be found onboard the Quantum-class liners, such as the rock and rolling Johnny Rockets, the whimsical Wonderland and the fresh oriental flavours of Izumi.

Waitrose also have the king of molecular gastronomy – Heston Blumenthal – in their repertoire and although he isn’t onboard the Quantum (he’d make a fabulous addition though, nudge nudge wink wink Royal!) restaurants from some of his celebrity chef buddies – including, Jamie Oliver and Michael Schwartz – are.

The onboard Wonderland is also quite Heston-esque, with fantastical offerings such as espresso air, nitrogen crush and white olive ice cream.

So, to sum up – the Quantum of the Seas is a car, a hotel, a supermarket and a phone!

What she is best however is a cruise ship!

Not just any cruise ship either…the smartest, most advanced and techy-friendly cruise ship to sail the seven seas!

But, don’t forget, she won’t be alone at the top for long – the Anthem of the Seas will be snapping at her stern in spring next year, too.

Are you excited? You should be! 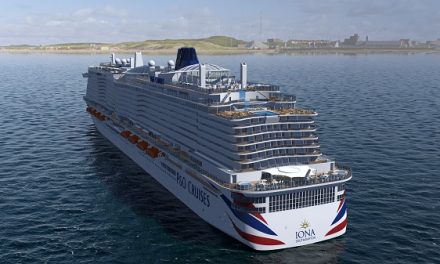 Everything You Need To Know About P&O Cruises’ Iona! 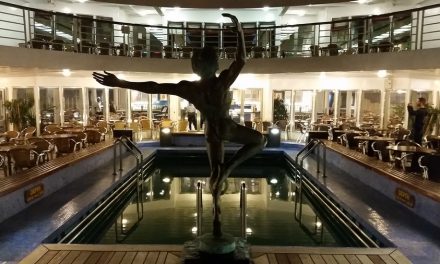 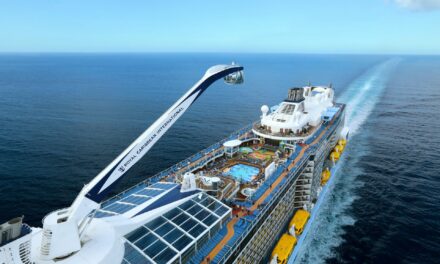 The Best Restaurants Onboard Royal Caribbean Ships and Why!