The Celebrity Eclipse VS Anthem Of The Seas

The www.CRUISE.co.uk team have recently been on both the newly launched Anthem of the Seas and the newly refurbished Celebrity Eclipse (hey it’s a hard life but someone has to do it!)

As both ships are owned by Royal Caribbean, Anthem of the Seas direct and the Celebrity Eclipse through their five star sister company Celebrity Cruises, and are both sailing out of the UK this year (2015) we thought it would be interesting to compare them both and see which ship is better suited to what kind of traveller.

What makes it even more interesting is that Anthem of the Seas is Royal Caribbean’s first five star cruise ship whereas all the other ships in its fleet are designated as ‘four star’. On an even playing field how would it compare?

We tried to find out…

How did the ‘feel’ of the ships compare?

How a ship looks when you’re on-board is perhaps one of the most important factors for people booking a cruise yet it’s one that’s very rarely discussed when you’re booking it. Every ship you ever sail on will have a unique ‘feel’ to it that can either make or break the experience and the same is true for both Anthem and the Eclipse.

As we’ve already said, Anthem of the Seas is Royal Caribbean’s first five star cruise ship but when we were on-board we noticed that she still felt very similar to their other, larger cruise ships. That’s not a criticism, just an observation. We love Anthem of the Seas but all of the Quantum class ‘extras’ felt like an added layer to a standard Royal Caribbean ship. Yes there was more to do but fans of Royal Caribbean will still feel instantly at home when they step on-board (just with more ‘stuff’ to do), we didn’t get a sense that it was a truly five star product.

The Celebrity Eclipse on the other hand is a great example of Celebrity’s Solstice class of cruise ship.

Celebrity themselves describe it as ‘new luxury’, almost like a five star ‘boutique’ hotel at sea.

Stylish and elegant, it doesn’t ever feel like a ‘family ship’ (although children are more than welcome), instead it feels specially designed for adults.

In fact you could almost say that Anthem of the Seas is perfect for families and the Celebrity Eclipse is the ship they graduate to after the children have left home. They still want that ‘glitzy American’ feel to their cruise ship, just packaged up a bit differently. Result: It’s a draw – Each ship will probably appeal to different types of people.

On this score Anthem of the Seas wins hands down. Don’t get us wrong… there’s nothing wrong with the entertainment on the Celebrity Eclipse, far from it… but it is the kind of entertainment you can get on any five star cruise ship.

Anthem of the Seas on the other hand is all about innovation and has the 270 theatre. A mixture of modern technology (8ft rotating screens) and performers make for one of the best shows we’ve ever seen at sea!

Result: Anthem of the Seas – Without a shadow of a doubt (did you even watch the video!)

On the face of it Anthem of the Seas should win this hands down. With over eighteen different dining venues and the dynamic dining option it should be well ahead of the Eclipse but…

Is too many options sometimes a bad thing? (You can see all of the venues available on Anthem of the Seas here)

On a short seven night sailing you don’t have a chance of sampling all the dining venues so you almost feel you need to cram in as much as you can; meaning even if you do have a favourite restaurant you’ll probably only dine there once as you’ll be so set on trying everything else.

The Eclipse on the other hand has far fewer options (again, you can see all the venues available here) but with only seven available choices you can comfortably eat in the main dining room without feeling you’re missing out (and the food in the main dining room is amazing – trust us!), maybe just trying a specialty restaurant on one or two nights when you want something ‘a bit extra special’.

Finally (and we freely admit we might be being a bit petty here) Wonderland (on Anthem) just feels like a copy of Qsine (on the Eclipse) to us with slightly wackier furniture – Why wouldn’t you want the original???

Result: Celebrity Eclipse – With a less is more approach

Where can I get a drink?

You’d think the bars on Anthem of the Seas would suffer a similar problem as the restaurants, with far too many options to try them all in any one cruise but in fact the opposite is true. On Anthem having a surplus of bars is actually a massive plus!

One of the biggest gripes we have with the Eclipse is the design and positioning of its bars. The Eclipse has very few ‘discrete’ areas in which bars are located. Instead a lot of them (take the Martini bar for example) were located just off the main concourse, completely open to passers-by.

We can see why Celebrity did this, it gives the ship a very open, modern look but it does mean that all the bars get very busy, very quickly (as it’s so easy to just drop by we’re assuming).

The only two bars with their own enclosed areas were the nightclub (not really ideal for a quiet drink) or the Sky Observation Lounge which whilst quiet, was at the very front of the ship and way out of the way.

Anthem of the Seas on the other hand had bars scattered all over the ship. Whilst this meant that you might occasionally have a bit of a walk if you wanted a specific bar, in the main there was always somewhere to get a drink just on hand. Plus it had the Robo-bar with robotic bartenders; what more could you win?

Results: Anthem of the Seas – There’s just more on offer!

Is there much to do on-board?

This is another time where it looks like Anthem of the Seas, on paper at least, should come out ahead but, in our minds at least, it will again depend on what kind of cruiser you are. Rock Climbing (and Gigi the Giraffe) Basket ball courts (all in the Seaplex, (the teen hang out) – The basket ball wasn’t us! We promise!

Whereas the Celebrity Eclipse has the likes of…

The Speciality Martini and Vodka Bar’s

And the lawn club complete with fountains.

Can you spot the difference? There is an insane amount to do on Anthem of the Seas (we’ve barley scraped the surface here!) but a lot of it is aimed at teenagers, families or at the very least quite active adults.

The Eclipse on the other hand has a much more laid back, relaxed atmosphere to it. The Lawn Club is a great place to chill out on a sea day (and on sea days they’ll even put on glass blowing demonstrations for you).

The area on deck 14 with the sun loungers also feels very adult, with the cabanas providing plenty of shade around from the sun.

Does anyone get dressed up?

This is actually the easiest of the categories to judge whilst still probably being one of the most controversial; you see, Anthem of the Seas doesn’t really have any dress codes.

Shorts and ripped jeans etc. are still a no no of an evening but dynamic dining means you can eat at whichever of her eighteen restaurants you want, whenever you want. If you want a slightly more formal evening you can always eat at the Grande restaurant but no one else will be dressed up when you leave – the dress code for the rest of the restaurants is smart casual meaning if a formal night is an important part of the cruise experience to you you might feel a little out of place in your tuxedo!

Celebrity on the other hand still conforms to the ‘traditional’ model of cruising with set nights being designated  as formal or semi/casual formal etc. etc. meaning if it’s time to get dressed up everyone will be. Result: Celebrity Eclipse – Dynamic dining is a great concept and gives you an unprecedented amount of choice as to where you dine but for us dressing up is an integral part of the cruise experience and whilst we can still do that on Anthem…. Well… It’s just we like everyone else to be dressed up with us!

We asked our specialist cruise consultant Holly Crabtree what she thought of the two ships and she said:

I loved them both

You can learn more about Holly here…

So which ship should you cruise on?

To be honest, that’s up to you! Our (very unscientific) comparison resulted in a tie and we’re not surprised. Both ships are suited to very different types of cruisers but both ships are still amazing in their own right.

They’re both classed as a five star experience so which ever you choose you’ll have a great time on but in our opinion Anthem of the Seas is best suited to either families or couples looking for a bit more of a ‘fun’, action packed cruise whilst the Eclipse just has the edge in sophistication and style so might be suited to someone slightly older; maybe 50+, whose children have now left home and are just looking for a slightly different kind of holiday.

That’s our recommendation anyway but ultimately it’s up to you! What do you think?

Have you been on either Anthem of the Seas or The Eclipse? How did you find it?

Which ship would you pick? 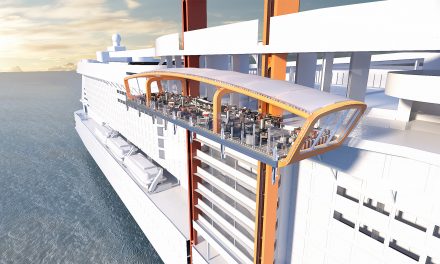