Last weekend we saw the final of television series Strictly Come Dancing, in which Caroline Flack and her professional dance partner Pasha Kovalev were crowned the worthy winners. So to commemorate the close of another wonderful series, P&O Cruises has announced the line-up for its popular Strictly-themed cruises.

Passengers will be given the opportunity to meet the professionals and learn some moves during the exciting dance classes.

A guest judge and a special celebrity guest will also be on board each cruise to make for a truly memorable Strictly Come Dancing experience.

Personal interviews, photos and meet and greet sessions will take place to give passengers the chance to get up close to their favourite stars. So make sure you have your camera at the ready to take that all-important selfie!

The stars will be performing special dance routines produced by BBC Worldwide, with glitzy costumes and dresses supplied by official designers DanceSport International.

Passengers will have the chance to purchase a costume of their own, as each piece will be modelled in an on-board fashion show after the live performances.

Not only this, but if you choose to embark on a Strictly-themed cruise with P&O, you too can participate in a dance competition that will take place in the ship’s main theatre.

Get ready to be judged for your moves because after you’ve strutted your stuff you’ll receive feedback from the judging panel, which will include the Strictly celebrity and guest judge.

Each of the four cruises lasts for 14 nights, with the first departing on April 23rd 2015.

Destinations include Portugal, Spain, Monaco, the Canary Islands and Scandinavia.

Will you be putting on your dancing shoes for P&O’s Strictly Come Dancing cruises? 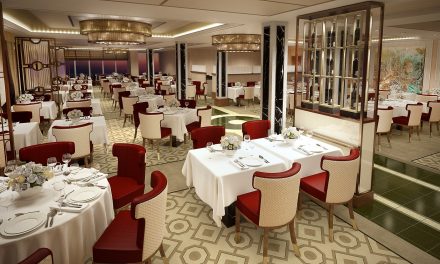