Fury erupted from certain quarters this past weekend over the news that the Cayman Government has authorised the building of a cruise dock for the island.

Cruise ships have been visiting the island for years now as part of western Caribbean itineraries but until now guests have had to be tendered to the island as it lacked the facilities for large cruise ships to dock.

This problem has been exacerbated in recent years with the arrival of bigger and bigger cruise ships, meaning the logistics of transporting thousands of guests to and from the island have become more problematic for cruise lines.

To try and overcome this issue and encourage tourism the Cayman Government have approved plans to build a dock and cruise terminal for the ships but many environmentalists have claimed this will have a devastating impact on the islands coral reefs.

However according to an environmental impact report released in June, the dredging process involved in creating the dock will destroy fifteen acres of coral reef and probably harm a further twenty acres. The reef is home to twenty-six different types of coral including two that are on the critically endangered list and four on the threatened list.

Keith Sahm, leader of the Save Cayman Anti-Port Campaign has said “It was not unexpected, but I think it is a sad day for the country,” The Facebook page he created for the campaign (which you can see here) has already received over 4,000 likes.

What are your thoughts?

How To Cruise On Benefits 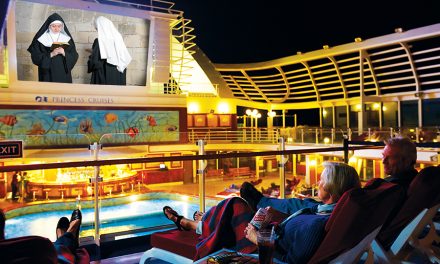 The Seas Are Alive With The Sound Of Music