Hippos & Muppets – Cruisers Come in all Shapes and Sizes

Cunard have always been a little different to other cruise lines. If nothing else they don’t have any cruise ships in their fleet, they’re all ‘ocean liners’.

The differences don’t just stop with the design of their vessels however and why would they? With 175 years of history and tradition behind them Cunard will always stand out.

Perhaps one of the most interesting things about Cunard’s history though (and certainly the most unusual) is the amount of animals they’ve transported over the years on their iconic transatlantic crossings from the UK to New York.

Everyone knows that you can take your dog and cat with you on a cruise on-board Cunard’s QM2 and obviously Seeing Eye dogs are allowed (more info here) but over the year’s cats and dogs have been the least of it!

Did You Know? It was originally the job of the on-board butcher to walk and feed all the animals but this job was assigned to a dedicated bellboy in later years.

When Cunard’s Britannia first set off in 1840 there were three cats on-board whose sole job was rat catching…. In fact passengers were forbidden from feeding them just so they’d stay hungry!

Back in its earliest days it was quite common for Cunard cruises to transport monkeys for the exotic pets market! Vegans/vegetarians look away now! Before refrigeration became common place all Cunard ships used to have a cow on-board to provide fresh milk for guests. On the last day of the voyage the unfortunate (and by now very sea sick) cow would be slaughtered to provide fresh steaks for a final farewell meal for the guests! Anyone familiar with modern cruise technology might know that both Royal Caribbean and Norwegian Cruise Line have gyroscopic pool tables and even bowling alleys that will stay level during bad weather. This technology was first employed by Cunard however back in the 1930’s. In the restaurant on-board the Berengaria budgies were hung around the balconies to entertain guests. The cages were hung on special springs to keep them level (and the birds happy) should the ship hit any bad weather. Cunard have always been famous for transporting celebrities from the UK to New York and back then, just as now, celebrity meant one thing….. Celebrity pets!

Mr Ramshaw was a twenty two year old eagle who made over twenty crossings with Cunard in the ‘20’s and ‘30’s. He had to be roomed near the on-board butcher to ensure a steady supply of fresh chicken heads! Any fans of black and white cowboy movies will know the name of Tom Mix – What you probably didn’t know was that he was a frequent first class traveller with Cunard and would often bring his horse Tony with him! In fact Tony had to be fitted with special rubber shoes to stop him slipping on the deck! Are you a fan of Britain’s Got Talent? After his win in 2012 Pudesy travelled on-board  Cunard Cruises QM2 and performed for the delighted guests.

Did You Know? On an official visit the Duke of Windsor joked it was a shame there was no lamppost outside the kennels for the dogs to relieve themselves against. Cunard then went and had one fitted, even going one step further and adding a fire hydrant for any American dogs (no, we’re not sure if they’d appreciate the difference either).

It’s nice to see it’s not just modern celebrities that can be Diva’s. Frances Day, a famous actress from the 1930’s insisted in bringing her own chickens with her so she could be guaranteed a steady supply of fresh eggs – This despite the fact the cruise she was on was only four days long

Perhaps the most unusual animal ever to travel in Cunard’s famous luxury (at least in our opinion) was Jimmy, a hippo from Naples being transported to Chester Zoo back in 1963.

He had to travel on deck with an awning over his cage to protect him from the sun although , we’re afraid to say, history is silent on whether he dined in the Britannia, Princess or Queens Grill restaurants (although we like to think he headed straight for the buffet each day). And talking about unusual guests…..

It’s not just animals Cunard have carried. Over the years many of the Muppets have enjoyed a relaxing Cunard cruise including Kermit, Miss Piggy, Waldorf and Statler and even Animal!

Lets hope Waldorf and Statler weren’t too critical of the shows on-board!

Your Friday Focus Ship Of The Week: It’s Anthem of the Seas! 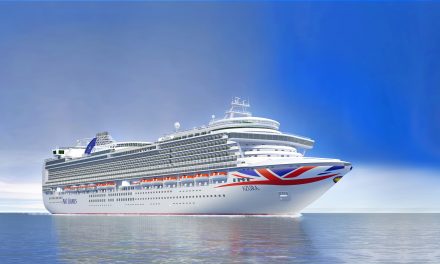 The Best of British Book Early And Here’s Why