Everyone likes a good book to read on their cruise; settled on the lounger, sun blazing, cocktail in hand…. It’s a great way to spend a relaxing sea day!

This summer’s hit amongst cruisers looks certain to be the first offering from new author Cathryn Chapman, titled Sex, Lies and Cruising.

What first made you decide to write about your experiences on-board cruise ships?

I had always loved creative writing and dreamed of one day becoming an author. In my thirties, I set out on a quest to grace the stages in London’s West End. I didn’t fulfill that ambition but I did land an entertainment job in a holiday park where I met my husband.

We moved back to Brisbane to settle down with our baby boy and it felt to be the right time to start writing my first novel.

This book was inspired by my brief stints on cruise ships in my twenties and thirties. So many crazy things happen on ships – some people love it and some people don’t. I’m probably one of the latter. There are definitely benefits to working on cruise liners, but I couldn’t get past the way people behaved, specifically when they were away from their unsuspecting partners at home.

I wanted to make Sex, Lies, and Cruising a light, fun book, so it’s told with humour through the eyes of a fairly naïve British girl who is new to the cruising environment.

I also have many more novels planned for the future about a wide range of women’s fiction topics. I’m definitely in it for the long haul.

Can we ask how much of the book is real and how much is ‘artistic license’?

It is definitely a work of fiction with real life experiences and observations weaved through the narrative. Like many women, I do have some things in common with the main character, Ellie.

She is on an emotional journey and makes some ordinary decisions, especially when it comes to men. I interviewed former colleagues about their experiences and heard some pretty crazy stories. In the end I didn’t use most of it because, as my mentor advised me, real life isn’t as structured like a good novel should be! He suggested I use real stories as inspiration, then throw it away and write good fiction. I spent a long time inventing characters which would work for the storyline and my vision for the whole series of books, including mapping out their childhood and teenage experiences. Between them, they do a whole bunch of things which I would never do – so there’s plenty of artistic license in there. That’s my job as an author – to make it believable.

Are the most shocking parts of your book real?

Like many authors, I’ve borrowed a few details here and there from real life, but I found that when I did try to use real experiences, it didn’t quite work for the plot. So while a couple of the shocking plot lines in the book were inspired by real stories, they were manipulated to suit the story and not explored to the full depth of what really happened. My book has more of a chick lit / comedic feel. I gave the characters emotional ups and downs, but I didn’t convey the real destruction caused by some people’s behaviour in real life. The lies, the deceit, the immoral behaviour – I feel like this book is only a taste of the sordid behaviours that were on display.

If you could go back in time would you still work on-board? What would you do differently?

Yes, but I would definitely do things differently. I would go straight to my cabin and sleep at least five nights out of seven. That way I would save more money by not visiting the crew bar, and get more sleep so I wasn’t so tired all the time! Partying seven nights a week takes its toll!

What advice would you give to people starting their first job on-board a cruise ship?

There are some really great experiences to be had from working on cruise ships – like the fact that many staff and officers get to eat food off the passenger menu. On many cruise lines, and at least in staff and officer positions, you’ll also have a room steward who services your room everyday – much like a hotel. That’s very easy to get used to. You’ll meet people from all over the world – it’s a true cultural melting pot and depending on what ship you are on, you’ll also visit amazing places.

You do work seven days a week, and even if you have a day or morning off, and can visit the islands, it can be tiring. While your job might not appear stressful, it can be a challenge to be friendly, happy, and polite to passengers all the time, regardless of how tired you are, or how rude they might be!

You are likely going to have to share your small cabin with at least one, and up to three people (depending on your job). They only have a tiny bathroom too so only take with you the items you need, and get used to your cabin mates seeing and hearing everything you do in your daily routine!

There are hundreds, sometimes a couple of thousand people working on a ship. You’re together in a confined space for many months at a time. There’s a saying that ship life moves at four times the speed of real life, so people tend to get involved in relationships – and subsequently break up – very quickly! It’s an area I would be very careful about though – if I knew someone was going to work on a ship, I would advise them to take their time and try not to get sucked into the action too quickly!

If circumstances were different would you ever consider dating a crew member again?

To be honest, I’m not sure. It’s very difficult to be at sea for six months and not have any relationships at all. However, it is probably more fun and less soul destroying to observe the ups and downs of the relationships of other people around you.

Have you ever experienced a character like the crazy ex in your book?

There were plenty of pretty unkind women on ships. It can be a competitive, difficult environment at times. I’ve seen new female staff get involved with guys onboard, only to find out later that their colleague may have fancied him (or been with him) first. That can make for some pretty difficult times!

However, the ‘crazy ex’ Maria is a fictional character concocted by my writing mentor, James, and me. We thought it would be fun to have a ‘villain’, although we disagreed at how evil she should be. James thought she should be evil to the core, with no redeeming features. I didn’t think she should be, and since the main character, Ellie, tries to see the best in people, I thought Ellie would look for an opportunity to see something good in Maria too. Maria was fun to write, and I’m trying to decide if she should appear in a later book!

Did you ever witness first-hand someone finding out about their partner cheating?

A few times and it was never pretty. It happened with partners who were on the ship, as well as partners who were on vacation or on other ships. One colleague had spent months getting paperwork approved for her boyfriend to be trans-shipped and join her. It was finally approved when she found out secondhand that he’d hooked up with another girl. Devastating, and awful that he didn’t tell her personally. I saw the lights go out in her eyes. She put on a happy face, but I personally don’t think she got over it, at least during my contract.

It also happened to me. The final straw for me on ships was when a good friend from another department came to me and said he’d just found out that a female colleague of his was in bed with my boyfriend. I was tempted to go down there and bust in on them, but I knew I couldn’t handle it. Instead, I handed in my resignation the next morning, and booked a flight to Paris.

Do you think all cruise ships are like this?

Yes. People are essentially locked up for months at sea with the same people, in the same bars, doing the same thing. It’s a bit like Groundhog Day. The combination of boredom, confined places, a need for intimacy and alcohol leads to some pretty interesting behavior!

You can read more from Jade here…

So if you’re interested in learning more about what goes on below decks or you’re just looking for a good read for your next cruise head over to Amazon now.

Will you be taking a look (or have you already read it?)

Let us know what you thought in the comments below…

Majesty Of The Seas Stays With Royal Caribbean 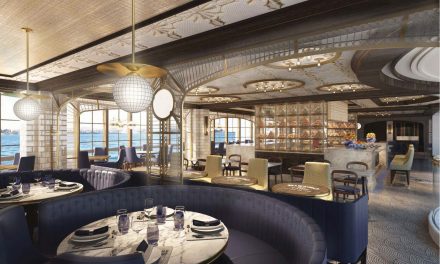