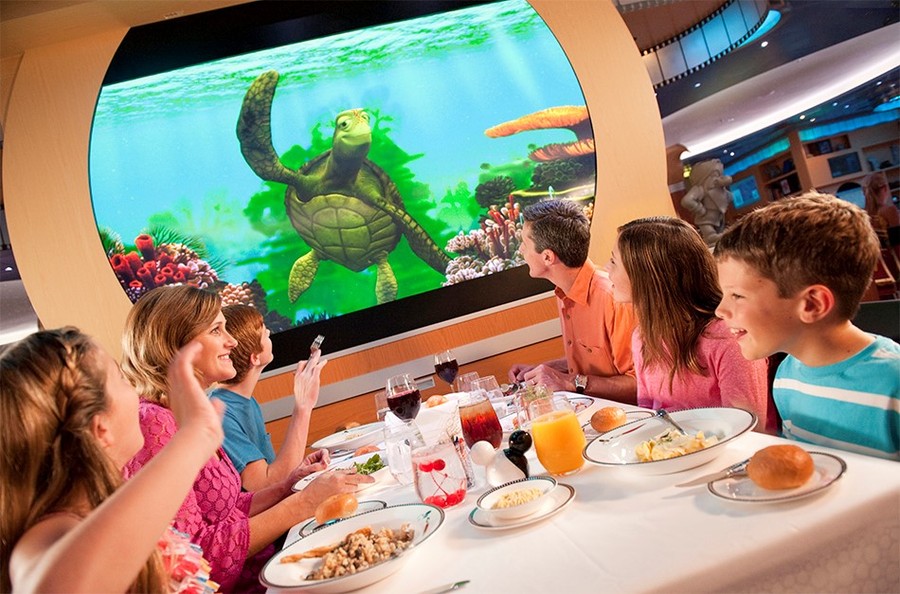 What would be the first thing you thought of if we said Disney Cruises to you?

All of these descriptions would be true and yet even amongst everything you’d expect on a Disney Cruise, Disney still sometimes manage to outdo themselves and surprise us.

We are of course talking about Animators Palette…

In the www.CRUISE.co.uk teams opinion, Animators Palette must be one of (if not the) most eccentric set of restaurants at sea (or we suppose on land!) and one of the big reasons we think you should be looking at Disney for your next cruise!

From polite dinner conversation with an animated turtle to making your own cartoon character come to life; you’ll be pretty much covered on the ‘whacky’ front with Animators Palette.

It’s featured on all four of Disney’s ships as part of their ‘rotational dining’ system, meaning you won’t have to wave a teary goodbye to your waiter… you’ll rotate between the different restaurants on-board each night with them.

Rotational dining is Disney’s answer to other lines freedom dining option. It means you still get to try every restaurant but get to keep the same waiter and table companions, meaning the staff can still remember any allergies you may have (as well as you’re favourite drink!)

All of the shows that take place in the restaurant are played three times each evening to make sure that diners don’t miss out and don’t worry, if you find you’ve particularly enjoyed yourself you don’t have to ‘rotate’ to a new restaurant; you can just turn up and ask to dine there again (subject to space obviously).

Like all things Disney they’re clearly aimed at children and the family market but to enjoy them all you need do is turn up with an open mind! The entrance to the restaurant is a plain walk way, covered in black and white illustrations of the most popular characters in Disney and Pixar, taking diners through Disney’s journey of animation through to a colourful restaurant with Mickey Mouse seats! Lights on the ceiling are randomly used to highlight the most popular scenes from Disney, showcased in screens that cover the whole restaurant.

In the Dream’s version of Animators Palate you’ll experience an underwater visit from Crush the Turtle.

“Sweeeeet dude, your totally thinking of the turtle from the awesome Disney/Pixar film; Finding Nemo”.

Music introduces the show and lights above diner’s heads will turn blue, bubbles will erupt from screens all over the restaurant and Crush will then introduce himself.

The experience is so interactive you may even find him commenting on your crazy Caribbean shirt. You’ll see him swimming from screen to screen (including the ones on the ceiling) leaving you feeling like you’re really underwater!

The Disney Fantasy’s Animator’s Palette has a similar looking interior to the Disney Dream’s with Mickey Mouse themed chairs and a room that resembles an actual animator’s workshop.

In this version of the restaurant however, rather than being entertained by Crush you can experience life as a real animator by bringing your own cartoon characters to life.

At the start of the night you’ll see a Mickey Mouse sketch turn from a black and white line drawing into a colourful animated version of himself dressed as a sorcerer. You’ll then be given a sheet of paper to create your own cartoon character which will be whisked away to be brought to life on screen by behind the scenes animators to dance with some of the most popular Disney Characters!

In the Disney Magic’s version of Animators Palate the interior seems to be the complete opposite to the colourful version available on the Disney Dream and Fantasy.

All the walls and furnishings are a rather sombre black and white with the only decoration being basic sketches of Disney characters.

With paint brushes as pillars and a palette on the ceiling with (black and white) paint splodges on, you’d almost thing you could be in a real Disney animator’s studio.

As guests start their evening’s dinner they may notice the illustrations decorating the walls becoming more complicated.

They all start out as simple sketches and then slowly the ‘artist’ will add in features that turn them into the characters we know so well.

As this is happening and colour slowly seeps into the room around you eagle eyed guests may notice their waiting staff will every so often look ‘different’. A black and white bow tie may be replaced with a coloured one. The same will happen with their waistcoats half way through dinner

After the sketches have been drawn and coloured in music will be played and the sketches will burst into life, showcasing the exact scene they come from.

As an added bonus guests can also draw their own cartoons and watch them come to life, similar to the entertainment available on Disney Fantasy.

The Disney Wonder is again similar to Disney Magic in terms of it’s black and white interior.

Guest’s night of entertainment will start off with a step by step viewing of a character being drawn, with the introduction of colour not only appearing on the drawing but all around the room too!

Mickey Mouse will then top off the fun at the end of the night as he dances around the restaurant dressed as a sorcerer with all his staff (and the staff – see what we did there?)

Have you a favourite Animators Palette?

Have you ever been on a Disney Cruise?

The UK’s love affair with cruising 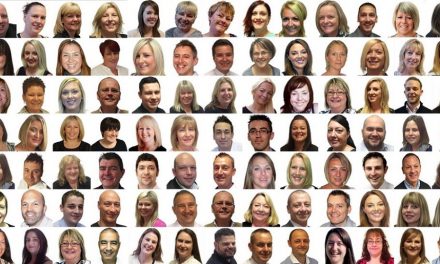 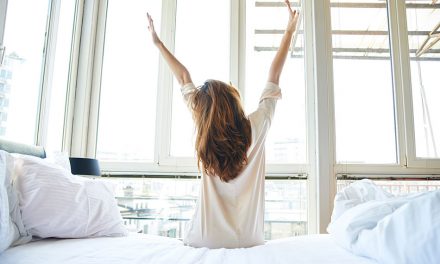